Domestic batches dominated the markets: Elstar, Jonagold and Boskoop had first place. The presence of Golden Delicious and Pinova expanded, and Cox Orange also gained in importance. The range was further diversified with the first domestic Kanzis: In Frankfurt, fruit in size 75/80 cost €15 per 7-kg package. Delbarestivale, on the other hand, lost importance, in line with the season. Italian goods were behind German ones in terms of relevance. Granny Smith and Royal Gala predominated in this area, according to the latest BLE market report. 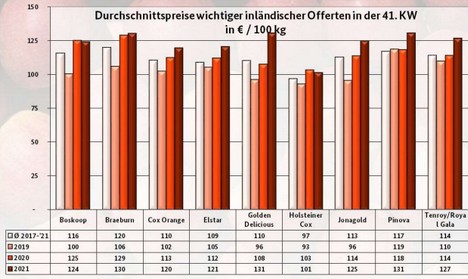 France participated mostly with Granny Smith, but in the end had only a complementary character. A few batches from the Netherlands and Poland were only important here and there. Overall, the availability was sufficient to satisfy the demand. In some places, the accommodation was limited due to the holiday season. However, distributors rarely had to make price corrections; in most cases, prices remained within their previous ranges. Imports from overseas were almost exclusively to be found in Hamburg. Pink Lady had to be sold there with discounts, due to their declining condition.

Pears
Italian Santa Maria and Abate Fetel dominated the scene. Business was quite quiet and demand was met without difficulty.

Table grapes
Accommodation was relatively quiet in most cases: supply and demand were sufficiently balanced. As a result, traders rarely had cause to make any changes to their existing prices.

Small citrus fruits
One could speak of an assortment that was slowly expanding; evidently, shipments were increasing. Due to the low temperatures, there was already a certain amount of customer interest in the products.

Lemons
Spanish supplies dominated the scene, with South African supplies supplementing them. The demand was quite okay, but was not enough to avoid discounts.

Bananas
A mostly quiet demand was well matched by supplies from the ripeners. Business was rather mixed, not least due to returns from food retailers and the fall holidays.

Cauliflower
Domestic goods dominated. Availability did not change significantly. Demand however, was on the rise.

Lettuce
Domestic offerings predominated with regard to iceberg lettuce. Dutch batches complemented the market. The presence of Spanish lots increased. Business was generally quiet, with no significant change in prices.

Cucumbers
For snake cucumbers, the domestic season was nearing its conclusion. There was a massive reduction in availability. The presence of Dutch and Belgian batches also waned.

Tomatoes
The assortment narrowed. Predominantly Dutch and Belgian batches came in. As a rule, prices trended upwards. At some points, distributors lowered their prices again towards the weekend, intent on minimizing stocks.

Sweet peppers
The Netherlands dominated the market and provided all color groups. In general, there were mostly price increases as the previously predominant Dutch shipments decreased.