Most of the stone fruit orchards in the Western Cape have finished flowering and growers have started thinning out fruit. It has been a cold spring and weekly rain (heavy rain again predicted for Friday) are causing a slow start.

The first stone fruit crop estimate by Hortgro, the industry organisation for stone fruit in South Africa, for the 2021/22 season shows the impact of new plum and nectarine orchards, with both crops expected to at least equal last year’s unexpectedly high volumes. 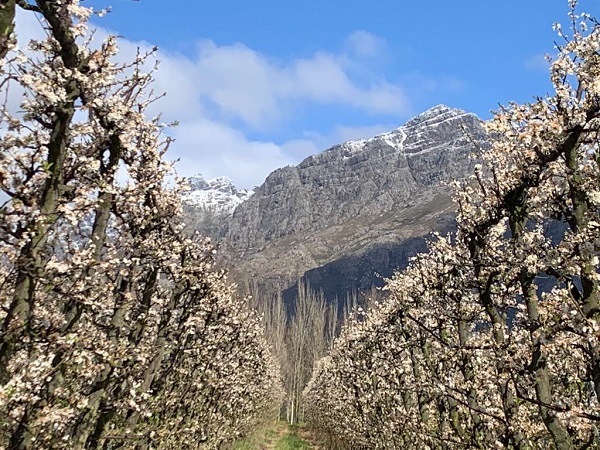 Plum orchards in bloom outside Stellenbosch, earlier this spring

Plum orchards are looking very good and a lot like last year, when the industry was pleasantly surprised by the size of the crop. “There's definitely a large plum harvest on the way for South Africa,” a Boland plum grower says.

“The flowering on plums was good and it’s very early to say, but so far so good,” says another plum farmer. “The next few weeks are crucial to determine the eventual fruit set but we’re feeling positive.”

Increase in nectarines
An increase of 9% in nectarine exports is expected (7.1 million 2.5kg cartons), following investment in new nectarine orchards.

“Peach volumes are expected to be the same as in 2020/21 at 2.45 million cartons (2.5kg equivalents). In recent years, dessert peach orchards have seen a decline in total areas planted,” Hortgro notes. 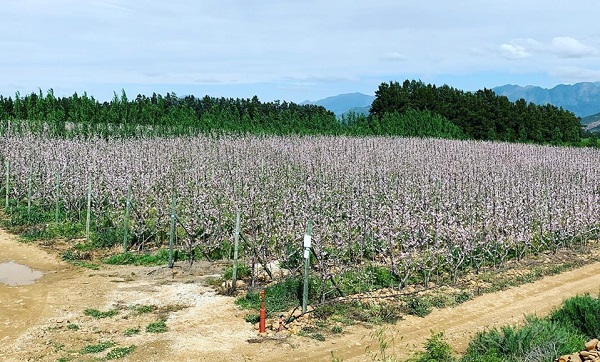 "South Africa will remain a reliable and stable supplier of stone fruit to all its export markets," says Hortgro

Effect of cold spring on sizing
Apricot exports doubled last season – the best apricot crop in years as the Cape came out of the drought years – but because the area under apricots has reduced, volumes are expected to be “the same or slightly down” on the 2020/21 season.

A cherry crop estimate is underway.

The cold affects fruit sizing and, according to a stone fruit grower, early peaches and nectarines will definitely be a size smaller as a result of the cold spring.

At the start of flowering, growers noted that the temperature anomalies experienced could have a detrimental effect on pollen pressure and bee activity. 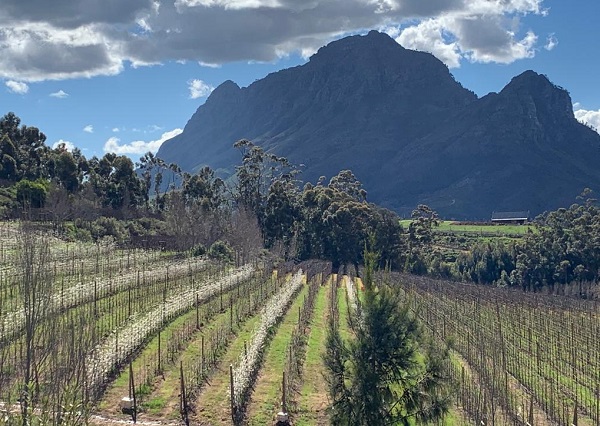 Boland plum orchards; note the bee hives at the start of rows

Plum industry “hanging by a thread”
“Prices were terrible last year with Covid and closed markets and oversupply so we’re a bit anxious," remarks a Boland plum grower, who adds that in his opinion, diversification into, for instance, citrus or blueberries has become a sine qua non for hitherto exclusively plum growers.

"The plum industry is hanging by a thread,” he adds. Hortgro has estimated that plum returns per carton were 30 to 40% lower during the past season compared to the previous year.

“Plum growers will simply not be able to survive the coming season based on the returns of the 2020/21 season. We cannot accept price decreases. In fact, prices need to be increased substantially in order to compensate for the realities of the cost structures.”

The stone fruit industry organisation cautioned last month: “If there is not a radical change in the mindset of importers, traders, retailers, and consumers, with regards to the constant race to the lowest possible price, the plum industry specifically, will wane to a shadow of its former self.”