After nine months, Port of Antwerp records a total throughput of 179.1 million tonnes, a rise of 4.8% compared to last year and the same level as 2019. Despite the still persevering operational challenges, all goods flows are recording growth. The reefer segment is also continuing to grow.

Growth in all segments
Container traffic continues to enjoy continuous growth, increasing 2.3% in tonnes (105.4m tonnes) and 2.8% in TEUs (9,100,620 TEUs) after nine months compared to 2020. Conventional breakbulk has grown by 62.7%, primarily due to the strong growth in steel trade (+65.9%). September was the best month of the year for the conventional breakbulk segment and even the best month since June 2011. RoRo is up 18.2% compared to the same period in 2020. In addition to the increased handling of commercial vehicles, wood and building materials are also notable risers.

Dry bulk throughput is up by 9.3%. The growth in fertilizers (+25%) and scrap (+13.5%) play a significant role in this regard.  Despite a sharp drop in the handling of crude oil (-68.5%), the handling of liquid bulk increased by 2.2% thanks to the strong performance in the chemicals segment, which grew by 9.8% and of oil derivatives which did 4% better than the previous year, mainly due to an increase in non-fuel related derivatives and energy gases. 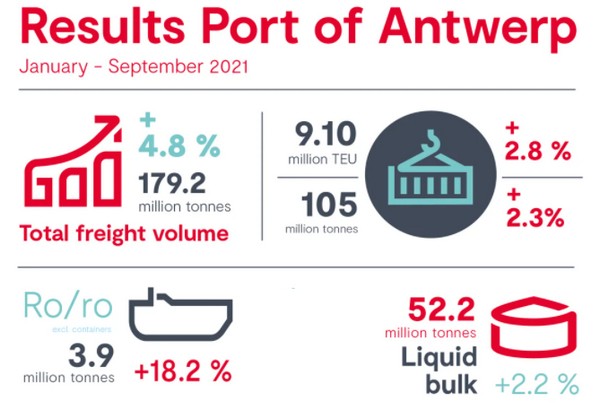 Seagoing vessels
In the period January-September, 10,608 seagoing vessels called at Antwerp, representing a rise of 3.6% compared to the same period in 2020.

Sustained growth figures for reefers
The number of reefer containers grew by 3.6% compared with the same period last year. Reefer containers contain fresh products including fruit, vegetables, meat and fish, pharmaceutical products and chemicals. Last year, the port already exceeded the worldwide growth in the reefer market with a total volume of 1 million TEU of reefer containers. This trend is clearly continuing, and with it the port of Antwerp is consolidating its role as an important player in the reefer segment.

The increased volume of reefer containers in Antwerp is partly due to increased demand. European consumers are attaching increasing importance to health and healthy food, and the pandemic has only reinforced and accelerated this trend. On the other hand, the growth is due to the strong maritime position in the shipping areas of Latin America, Africa and the United States, and with countries such as China and Singapore. In addition, the port offers specialised terminals, coldstores and logistics service providers with a special focus on reefer cargo.

For more information:
Port of Antwerp