On October 14, the Protected Geographical Identification (PGI) Cítricos Valencianos held the symbolic harvest of the first Valencian orange to kick off the citrus season. The event, which was held for the second consecutive year, is meant to promote the qualities of oranges and mandarins just at the time when they are about to start reaching the markets.

According to the president of the PGI Cítricos Valencianos, José Barres Gabarda, they are "very satisfied with this event, which has undoubtedly been supported by all entities linked to the sector in one way or another, from agricultural organizations to commercial firms, industry, supermarkets and consumers. The Government of the Region of Valencia has also joined the call, and as in the previous edition, President Ximo Puig and the Councilor of Agriculture, Mireia Mollà, have been in charge of harvesting that first orange." 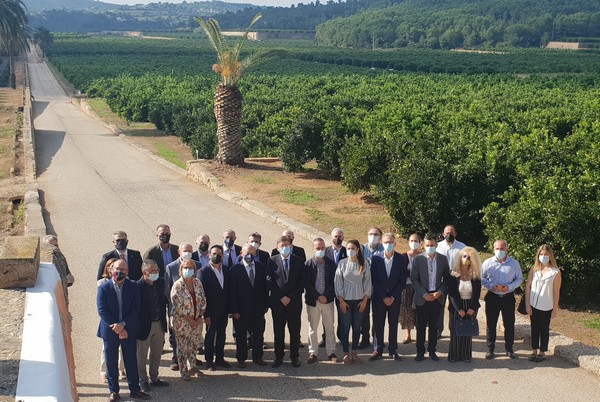 The head of "Cítricos Valencianos" also said that "more than 100 people have taken part in this important event. Through this initiative, all agents involved in the different stages of the commercial process have joined forces with the aim of promoting a cohesive organization that results in the common benefit of the entire sector. Also essential is to make it clear to consumers how important Valencian citrus is in economic, health and environmental terms, unlike the fruit from other origins."

"Smooth and balanced" campaign
For his part, the Managing Director of the PGI Cítricos Valencianos, José Enrique Sanz, said that "we expect a smooth and balanced Valencian citrus season, since a lower production is expected, especially in the case of clementines. This, in combination with the excellent quality, leads us to forecast a good season with a high level of internationalization."

The head of Cítricos Valencianos also said that "there are currently 60 companies associated with our organization, and at the beginning of this season, we expect more than five operators to register. It is worth recalling that we ended the 16/17 campaign with 36 operators, and that now, four campaigns later, we are starting the 21/22 campaign with 70% more operators registered."

PGI growth
In the same line, Sanz said that "the demand for the PGI seal is increasing both nationally and in Europe, especially in the French and Italian markets, where our brand is highly recognized. Buyers in these countries are increasingly demanding our quality seal. There is also a good demand in the Netherlands, Germany and Belgium, and outside of the European Union, we can mention the Arab countries, as well as growing interest in China."