Last season, the EU27 imports of oranges from outside the Union were more than ten percent lower than the previous one. The season ran from October 2020 to September 2021. Those imports totaled 830,000 tons compared to 960,000 tons in 2019/2020. That was also less in the season before, notes Jan-Kees Boon of Fruit&Vegetable Facts. 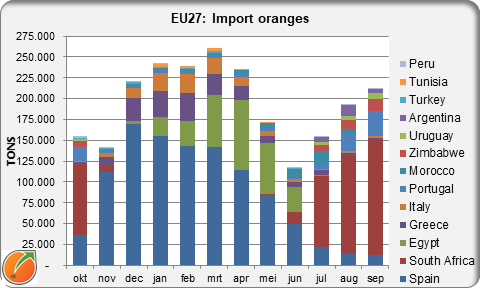 Imports of particularly South African oranges determined the picture. In the season that has just ended, the EU27 imported more than 20% fewer oranges from South Africa than the previous one. That was due to problems in the ports. At 350,000 tons, it was the smallest import since 2016/2017. In 2019/2020, it was much more, namely 450,000 tons.

More from Egypt
That was, however, offset by significantly higher imports from Egypt. The 310,000 tons were more than 20% larger than the 255,000 tons in 2019/2020. Egypt and South Africa's import seasons do differ, though. The EU imports oranges from Egypt mainly from January to June. From South Africa, it is between July and October. These two supply countries account for 80% of total EU imports from third countries.

South African exports about to set record; lower, due to issues at the ports
Initially, it seemed that this year, South African orange exports would reach a new high. But, the expected 1.32 million tons will be much lower. Besides the EU, South Africa exported fewer oranges to other countries too. The deficit to the Gulf States was fairly limited at -12%. However, there were almost 20% fewer exports to countries in South and East Asia.

There are still plenty of South African oranges in cold storage. So, more could still come onto the market. 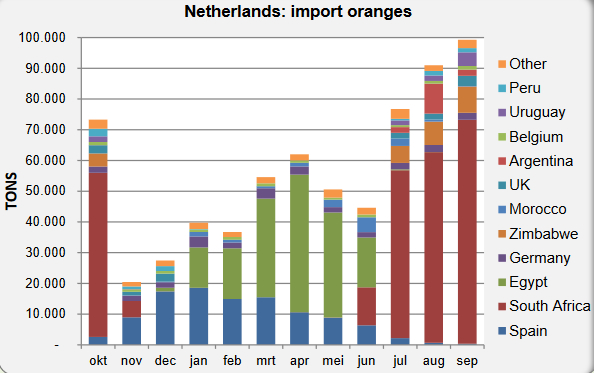 In the 2020/2021 season, the Netherlands imported 20% more Egyptian oranges. That quantity grew from 140,000 to nearly 170,000 tons. Imports from both Egypt and South Africa are largely destined for re-export to other EU countries.

Spanish exports slightly down again
In this just past season, Spain exported a total of roughly 1.54 million tons of oranges. That is six percent down from the previous season's 1.64 million tons. More than 85% of Spain's orange exports go to EU countries.

Germany and France are by far the most important buyers. They have shares of 29% and 24%, respectively. Exports to both those countries fell slightly in the last season. Italy and the Netherlands are at numbers three and four. And they took far less Spanish product in the last season.