Since the Council of Agriculture signed the "Memorandum of Cooperation for the Development of Intensified Food and Cultural Exchanges" with Kasama City, Ibaraki Prefecture, Japan in 2019, nearly 100,000 metric tons of bananas have been exported for Japanese schoolchildren's lunches, 25% of which are From Pingtung County.

Hu Zhongyi, the Director of Agriculture and Food Agency, pointed out that from the 1960s to the 1970s, Taiwan was called the "Banana Kingdom." Almost all of the bananas in Japan came from Taiwan. However, after Southeast Asian countries rushed to the export market for bananas at low prices, Taiwan’s market share of bananas in Japan has dropped significantly. However, after the signing of the MOU with Kasama City, Ibaraki Prefecture, Japan in 2019, the crisis became a turning point. 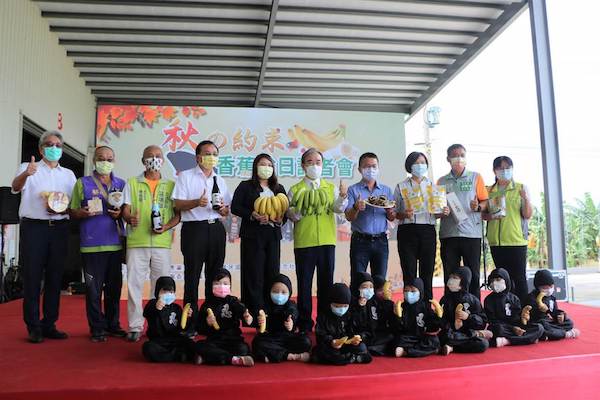 In the past three years, Taiwan has exported nearly 100,000 metric tons of bananas for Japanese schoolchildren as after-dinner fruits, of which 25% are from Pingtung. Therefore, when the bananas are sold in Japan again, the press conference is specially selected in Pingtung, which is of great significance. (Photo by Xie Jialin)

Hu Zhongyi said that after the signing of the memorandum, Kasama City has become the best promoter of bananas in Taiwan. They are also actively promoting cooperation between schools in neighboring cities and towns. Therefore, starting from 2019, besides Kasama City, Taiwan bananas are exported to Mito City and Oarai Town, Hitachi Naka City and Yachiyo Town.

He said that the memorandum has enabled Taiwan’s bananas to be exported to Japan for three years, and the sales volume has increased from 3 metric tons to 3.5 metric tons this year. In addition to schools, from the perspective of commercial activities in supermarkets and shopping malls, Taiwan’s banana sales reached 12 metric tons. Based on this data, it is not a dream to expect Taiwan to back to be the top bananas exporters.

In addition, he also mentioned that the control of fruits sold to Japan in the past had to meet the EU standards of "GGAP" before they could be imported. However, after the Council of Agriculture upgraded Taiwan's exclusive TGAP verification specification to TGAP PLUS, and through the Taiwan Banana Strategic Alliance to match the supply of farmers' groups, this year's Olympics successfully sold 5 tons to Japan, and it was used as a supply for athletes. Since bananas are one of the best fruits after exercise, they also opened up popularity.

He emphasized that in terms of the proportion of Taiwan banana exports, Pingtung bananas accounted for the most at 25%, followed by Chiayi 16%, Kaohsiung 13%, and Tainan 7%. Therefore, when the bananas are sold in Japan again, the press conference is specially selected in Pingtung, which is of great significance.