China is one of the world's largest producers of citrus fruit. Production areas are numerous and spread across the country. The honey tangerine from Xinyu is one of the most drought-resistant and cold-resistant tangerine variety in the world. Under regular weather conditions the Xinyu tangerines enter the Chinese market in large volumes between late October and early November. This year, however, weather conditions were extreme. Not only is the production volume of Xinyu tangerines smaller than usual, but the tangerines also ripen later than in previous years.

"Production areas have suffered from a series of extreme weather conditions. There was severe frost late last year, which weakened or even killed the tangerine trees. That is why the trees produced fewer flowers and flowers of lesser quality. In addition, when the flowers blossomed, the production areas suffered from rainy and overcast weather. There was not enough sunshine to stimulate photosynthesis in the leaves, and so the trees weakened even further. The amount of fruit on the trees is far from ideal." This is according to Mr. Peng of Jiangxi Woshenghui Agricultural Development Co., Ltd. 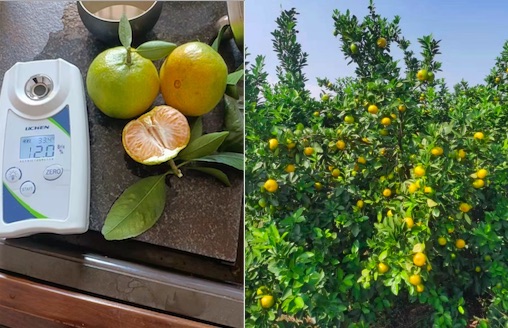 Mr. Peng continued, "these are only the problems we encountered early in the season. In the second half of the season the tangerines suffered from drought. Orchards without proper irrigation systems lost a lot of fruit due to a lack of water supply. Then there were many days of continuous rainfall. Some orchards flooded. The tangerines were swollen during the drought and then split open during the flood. All of these conditions greatly impact the average product quality of Xinyu tangerines."

The production volume declined this season. Nearly a month of drought means that the weight of individual tangerines remained below standards. In addition, high temperatures during the start of autumn affected the production volume as well. Moreover, tangerines obtain their characteristic color as a result of the difference in temperatures during the day and at night, but with the high temperatures in autumn the difference was not big enough. That is why the tangerines ripened 7-10 days later than usual.