When it comes to pears, varietal innovation goes through CREA. The latest cultivar to be introduced is called CREA 194. "It derives from Carmen pears and boasts constant high productivity, so much so that thinning is necessary at times," reports researcher Giuseppina Caracciolo from CREA (Centro di ricerca Olivicoltura, Frutticoltura e Agrumicoltura) in Forlì. 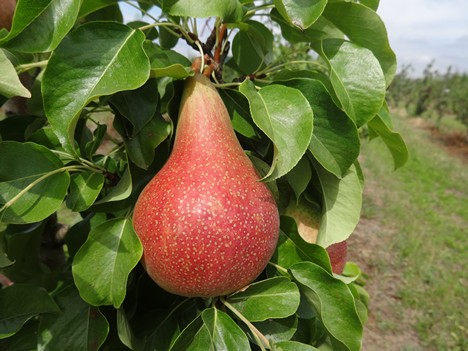 "Fruits are medium-large, with a yellow-green color and a red overcolor on 30-40% of the surface. Medium-fine flesh which is juicy, sweet and aromatic. Resistance to handling and shelf-life are higher than those of Carmen. Geoplant Vivai was granted the exclusive multiplication and commercialization license for this new variety."

Just as with apples, there is a lot of interest for red-fleshed pears too (see photo below). Some ancient varieties found on the Romagna hills, known as "Cocomerine", boast a red flesh. There are two types - one ripens early (August), while the other is late (early Autumn). In 2003, these pears received the Slow Food recognition thanks to the oxidant compounds that convey great anti-inflammatory properties. CREA carried out a few crossbreeds with "Cocomerine" pears, obtaining some new lines that boast interesting organoleptic qualities and a red flesh. The first experimental tests are currently underway.

"Carmen is definitely the most successful variety, as it becomes available around 20 days earlier than other high-quality pears." 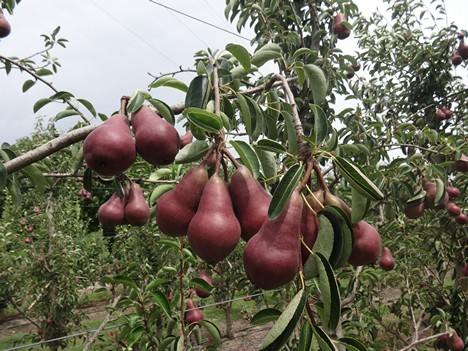 "Another important variety is Falstaff, which is easily recognizable due to its oblong shape reminiscent of that of Abate Fetél and a red color on over 50% of the surface. Orchards cover 100 hectares in Emilia Romagna. The variety, obtained by CREA and protected by a Community design, is managed by New Plant.

So far, 8 varieties have been obtained: Tosca (1993), Carmen*, Norma e Turandot* (2000), Aida* and Bohème* (2003), Falstaff* (2012) and CREA 194* (2019). Since 2008, the program has been co-financed by New Plant, a consortium that gathers three POs in Emilia-Romagna (Apo Conerpo, Apofruit Italia e Orogel Fresco) for the search of new fruit varieties which produces over half of pears in Emilia-Romagna. As part of the program, New Plant and CREA identify the most promising selections among those in first-level fields in Maglaino di Forlì, which are the assessed by two controlled companies monitored directly by New Plant. Only the best lines will proceed to the phitosanitary checks and go on to become a new variety.