That creates a continuous airflow. And that, in turn, ensures that frost does not get a chance to form on the plants. It directly drives its propeller and creates pressure. So, a relatively small motor is enough to create tremendous air movement. It can protect up to 4.5 (small) or 7 (large) acres.

Swift International has been distributing these machines since early 2020. They are developed and manufactured in New Zealand. In the Benelux, Swift International works with Zeelandtrac. Zeelandtrac is located midway between the port cities of Rotterdam and Antwerp. This service partner provides technical support and gives demos too.

Swift now has distribution channels. The company wants to set up service points in several regions. Talks about this with seven countries outside of the Netherlands and Belgium are at an advanced stage. "We're very satisfied with our first two seasons' sales. We've also already received nice orders for the coming season. You have to place these on time. People often only think about it when their crops have been damaged," says Ernst Slabbekoorn of FrostFans.

"Our new model can protect up to 7 ha. And the existing one, 4.5 ha. So, we can offer almost every grower a suitable crop protection solution. Now that this machine is in use, we're also getting serious interest. That's from businesses that want to avoid irrigating against night frost as much as possible. That's because of settlement, disease pressure, and in some cases, limited water availability." 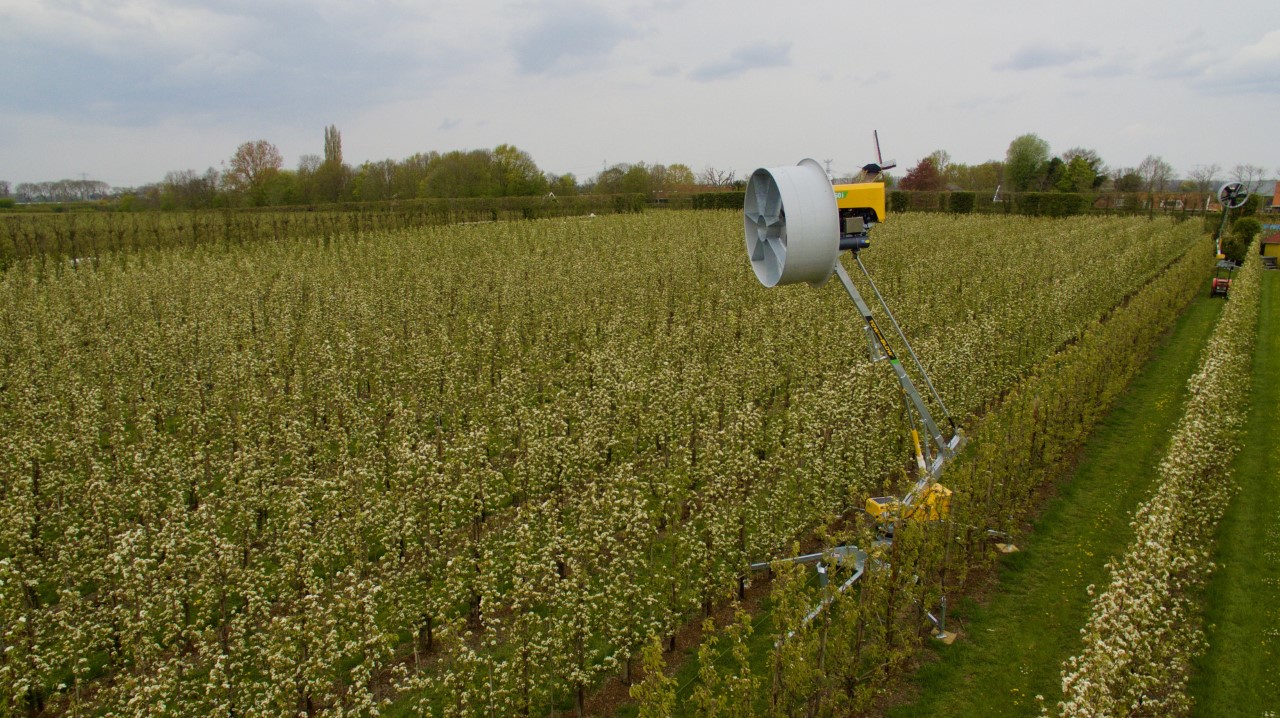 "I bought this machine last year. That makes me one of the first in the Netherlands," says grower Gino van Acker. He cultivates organic apples and pears in an 18-hectare orchard. "I could purchase it thanks to a BelOrta GMO scheme. I supply that cooperative. That subsidy made it an even more attractive investment."

"I used the machine in an apple orchard where I can't irrigate. And it went very well. I took readings when it was frosting. The temperature remained above 0°C in the area where the machine was running. A same-sized area 300m away was two degrees colder. That can make all the difference."

Setting differences
Fellow organic farmer Koen van Eijkeren also had a good experience using his two machines for the first time. "Our farm is in Belgium, near the Dutch border. It's not far from the sea. In recent years, we paid the price every spring with night frost. It wasn't as severe this year, but it was between -2 and 0°C on a couple of nights."

"There was a noticeable difference in the setting of the plots where the machines were running. Though the flowers on the other parcels weren't entirely frozen either. We've spread our apple and pear production over several smaller orchards, totaling 33 hectares. We naturally placed the machines in the most vulnerable areas. The trees on those plots had better settings," he says.

Koen is also well-pleased with how easy these machines are to use. "I used to work with candles and braziers. But they only ever lasted a few nights. And cost a lot of effort and money. They also produce a lot of air pollution while having variable results. So, I started looking for an alternative. These machines' mobility is a big plus. They're very easy to use."

"You move them using a tractor. Once you've placed and set the machines up, they do the rest automatically. These machines cost a pretty penny. But I think I can work with them for years. And I've already partially recouped that investment. If your sprinkler system fails, you can still suffer damage. With this machine, you don't have to worry about that. I was a little concerned about wind damage. But, that never happened," he continues.

No worries
"I have plots that I can't irrigate. But that causes a lot of hassle. You have to get out of bed at night every time it's cold and wet. You can set this machine up in no time at all. You set it to a certain temperature - I start it up when it's half a degree above zero - and then you don't have to think about it again," agrees Gino van Acker. "I'm, therefore, considering purchasing another one. It will be for the pear orchard I can't irrigate."