'In general, the availability of grapes was sufficient to meet the demand'

Italian goods formed the basis of the offer. Italia, Michele Palieri and Crimson Seedless were at the forefront. Red Globe and Victoria supplemented the action. Turkish Sultana generally turned over quickly. In some places, they became more expensive as a result of scarcity. In Berlin, on the other hand, they became cheaper, as demand could not keep pace with the expanded supplies. In addition, Spanish returns from food retailers made it more difficult to sell regular products.

From Greece, Thompson Seedless and Crimson Seedless were the main imports; overall, prices remained at the previous level. High-quality Alphonse Lavallée from France cost as much as before and arrived in a slightly limited range. Few Spanish fruits completed events. In general, availability was sufficient to meet demand. Therefore, traders rarely had reason to fundamentally modify last week's prices. 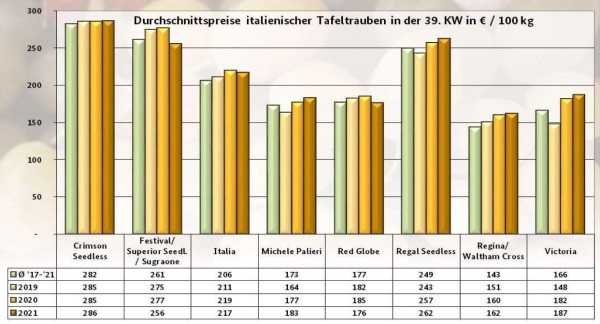 Apples
The dominant domestic shipments gained strength once again, as the presence of different varieties intensified. Boskoop and Rubinette, for example, played a stronger role than before.

Pears
Italian Abate Fetel, Santa Maria and Williams Christ were at the top of the range. Demand was not particularly strong, being easily satisfied.

Bananas
Business was fairly mixed. Where supply and demand were sufficiently balanced, prices did not change.

Cauliflower
Domestic products dominated the scene, Dutch and Belgian ones appeared only sporadically. The demand was met without any problems. Prices mostly trended slightly downward.

Tomatoes
The range continued to consist mainly of Dutch and Belgian fruit. Demand could usually be met without difficulty. The quality was mostly convincing.