'Domestic fruit harvest 2020 was below average'

A massive cold snap at the end of March and beginning of April caused the 2020 domestic fruit harvest to be well below average. Stone fruit growing was particularly hard hit, with total failures in many cases due to severe sub-zero temperatures, despite extensive frost protection measures. Yields from pome fruit orchards were somewhat better, but still below average. Satisfactory production volumes were achieved for soft fruit.

Below-average apple harvest due to late frosts
For apples, a production volume of 160,100 tons (-13% compared to 2019) was achieved. Of these, more than three quarters came from Styria. The long late frost period in April as well as aging effects had a strong yield-limiting effect on a variety-specific basis. The varieties affected by frost showed reduced qualities such as frost rings and skin defects. For pears, the harvest of 8,200 tons was significantly higher than in the weak previous year (+30% compared to 2019), but still remained within the range of the ten-year average (-2%). 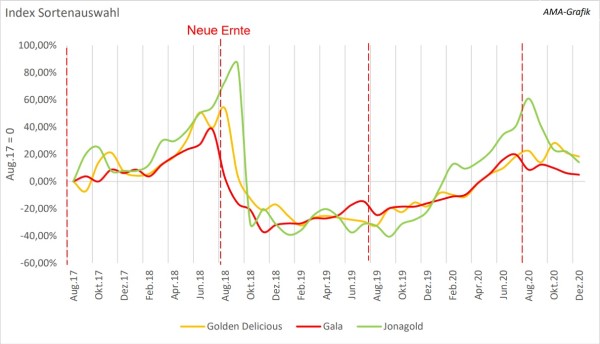 Record loss of stone fruit, total loss of apricots
Only 5,600 tons of stone fruit were produced, which corresponded to a record minus. The harvest was not only well below the long-term average (-56% compared to the ten-year average), but also 64% below the previous year's level. For apricots in particular, the extreme late frosts led to catastrophic deficits. On average, only 11 dt were harvested per hectare, which means that the production share of apricots shrank from the usual level of around 90% to 60%. Austria-wide, a crop of just 950 tons was recorded (-90% compared to 2019), which was 85% below the ten-year average. Cherries also suffered from the late frost after an early start to vegetation. The yield amounted to 1,400 tons, 42% below the previous year's figure. Plum production was on a par with the previous year at 2,000 tons (+1%), but the harvest was 26% below the long-term average. This was also mainly due to frost at blossom time for this crop.

Strawberry yields divergent from region to region, currant yields growing gently
Strawberry production was quite satisfactory, although slightly below the previous year's level (-2%), and amounted to 13,300 tons, which was 3% above the ten-year average. The fruit came mainly from Lower Austrian, Styrian and Upper Austrian cultivation. The latter suffered heavy losses due to frost, with the result that the production share of this province fell from the usual level of around a quarter to 18%. In Styria, on the other hand, an exceptionally high yield level was achieved. Currants, which came mainly from Styrian production, achieved a marginally higher harvest of 3,200 tons than in the previous year (+2%).