Cold spells in the spring have wreaked havoc on some European pear producing countries, with a loss of up to 90% of some Italian varieties, and lower volumes expected in the Netherlands and Germany also experiencing losses. This is expected to result in much higher than average prices, with the German market expecting a price hike of up 50%. Other markets such as Australia and North America were not as affected by the climate, and expect more positive season, with Australia experiencing increased consumption, and North America seeing a rise in the purchasing of organic pears. 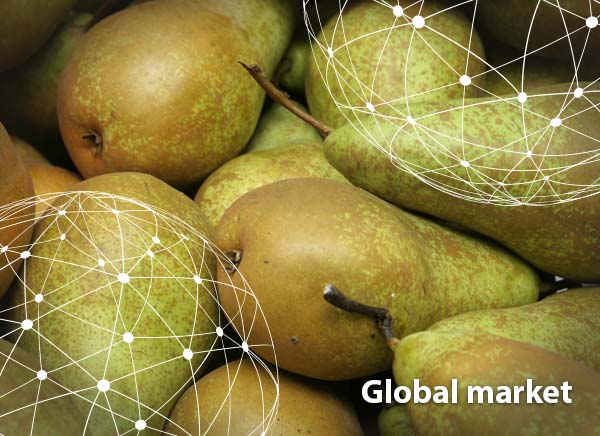 "Most of the pears in the Netherlands have been picked, apart from some late varieties. This year, the fruit is a lot coarser than last year. Whereas last year we had a large number of pears below size 60 mm, this year we are working hard to get the large number of 70 mm+ pears into the right channels," says a trader.

"The size has ensured that despite the low number of units, some kilos have been picked even though this is still significantly less than last year in most growing areas. The quality of the pears is fantastic, good firmness and super taste. Visually, there are some challenges due to the cold flowering and setting period. The Conference pears are clearly more bronze and the skin of the Lucas pears is not as smooth as in previous years. At the moment, the export has already started, volumes are still manageable due to local productions. We expect exports to increase steadily in the coming weeks, contributing to the right price setting."

WAPA forecast this year's Conference pear harvest at 805,000 tonnes and according to growers this seems to be coming pretty close. The quality of the Dutch pears looks positive and the size is also good. According to the Dutch growers, customers will have to get used to the price level, which is higher than in previous years. It is difficult to predict what the consequences will be for the export.

Germany: Prices between 30-50% higher than last year
A managing director from a large company in Northern Germany said that their pear marketing takes place nationwide in equal parts in the food retail trade and in the specialist natural food trade. The harvest volume this year is about 25% below the previous year. This corresponds to a yield of 25,000 tonnes of top fruit, of which he has a total harvest of 350-400 tons for pears; however, the main share is apples. The Alexander Lucas and Conference varieties take up about 60, if not 70%, of the crop. Everything else is divided between the Xenia and Novembra varieties. Other than this, he also offers varieties from the northern German region, e.g. 'Köstliche von Charneux' as well as Clapps Liebling.

The demand for organic pears has increased quite well, but no exact figures can be given yet: "We notice that many customers from food retail and discount stores currently carry organic pears as an item, but not on a permanent basis. Therefore, it is also difficult to say anything in general about the growth rates. Whether this will be steady sales can only be said after a few years," they said.

Currently, the farm is still in the early stages of pear marketing. "Overall, we are the latest area in Germany in terms of vegetation development. But what can already be determined, I think, is that the quantity of both organic and conventional pears will be significantly lower than in recent years. Purely in terms of harvest volumes, this will be a very high-priced season. We are between 30-50% higher than last year in our selling prices."

Italy: Worst pear season ever
The Italian pear industry will remember 2021 as an exceptionally bad year. Production in the north of the country was almost entirely killed off by frosts during the spring. A player who speaks from Northern Italy says that the Abate pear crop has suffered a decline of 90%: the production areas in Emilia Romagna and Veneto were the most affected by the low temperatures in April.

The situation of the summer pears, compared to the autumn ones, was slightly better in terms of quantity and most of the product has already been sold.

For the Abate Fetel pears, retail prices have increased exponentially, even exceeding 4 euros per kg. According to another player, this is of no help to anyone as producers will still not make enough income, as consumers choose other options.

Due to the lack of product, the country is witnessing imports of pears on an unprecedented level, especially from Spain.

In terms of value, total exports touched 140 million euros, with a positive change (+31%) compared to the 2019/20 season, but with an average annual price that fell by sixteen percentage points on last season while maintaining a position above the recent past levels.

EU countries represent 90% of the total destinations of Italian pears exports, with an 80% of the volume concentrated in few markets: Germany is the main market (45% of the total in the last campaign) followed by France at 15%, Austria 9%, Romania 5% and the United Kingdom at 3%, Hungary, Switzerland and Slovenia at 2% each.

According to Gfk Consumer Panel, the frequency with which Italian families buy pears on average is 7.5 times a year: a frequency which is lower, among the main fruit types, than  the levels reached by apples (12.1), oranges (10.2) and lemons (8.1). The average purchase of pears is equal to 1.1 kg, rather stable compared to the recent past.

Although we might imagine the pears as a category purchased by all families, the number  actually reached in the last year is equal to 15,244,000 families, that is to say a 58% of all the Italian families. Therefore, pears certainly show positive dynamics but are also characterized by a noticeable potential, taking into account that 42% of households do not purchase pears over the course of a year.

Turkey: Low volumes and high prices
The volumes are lower than last year as there has been high temperatures during blooming period. Alongside with this, the sizes are smaller whereas the quality is still good. Despite the depreciation of the Turkish Lira, the prices are still expected to be higher when compared to last year due to lower volumes. In terms of plantation, although the overall acreage planted has not changed, the varieties grown on these acreages have; there is a shift from the Santa Maria pear towards the Deveci pear, whereas there used to be a balanced distribution between two varieties. The Russian Federation and the Balkan Region are the top export markets for Turkish pears whereas Middle East is also a developing one.

North America: Organic pears on the rise
“We had a great Bartlett pear crop come in this harvest. Sizing is about the same as last year, with minute changes based on variety and harvest timing,” says one grower and shipper. “The bin estimate volume coming in looks very similar to last year.”

Pear volumes are coming out of the Pacific Northwest and the grower and shipper notes its supplies are about 35 percent organic. “Our harvest starts with earlier varieties such as Bartlett and Bosc in the lower valley areas near our headquarters in Yakima, WA, and finishes with later varieties and in our more northern orchards near the Canadian border,” says the grower shipper.

Right now, Bartlett, Bosc and Red Pears are in season with Anjou volumes close behind. “Our Anjou pear momentum is building, both green and red Anjou,” they say. “We continue to have a steady supply of Asian pears, which have risen to the 4th place in pears over the last few years (Nielsen).”

On demand, it’s coming from throughout the U.S., Canada and Mexico but South and Central America, Middle East and India are all strong, developing markets.

Organics of course is also of note. According again to Nielsen, organic pear prices jumped up 16 percent in year over year growth with volume up two percent and average retail up 14 percent to $2.28/lb. Organic volume share was also up at eight percent, picking up again after the dip it’d seen last summer.

In terms packaged sales, the packaging dollar share remained low at 18 percent, unlike the mid-20s average seen during the peak of the pandemic. Packaging dollars were up 47 percent however and volume was up 46 percent year over year, alluding to the rise in overall volume share over the coming harvest months.

Australia: Sales of pears increase significantly in Australia
The latest data shows that in the year ending May 2021, Australian pear sales were increasing quickly, at 9.2 per cent in terms of dollars and growing by 5.2 per cent in terms of volume/kilograms. The percentage of buying households remained steady, while the average dollar spends rose from $19.31 to $20.89, and rose in terms of average weight purchased, per kg. The data also found that 68.1 per cent of all pear dollar sales were sold through major supermarkets (Coles, Woolworths and Aldi). From a production perspective, there was a slight increase in pear volumes according to the latest Hort Innovation statistics. It found that for the year ending June 2020, 118,545 tonnes were produced (a four per cent rise), and value increased by 13 per cent to $130million. Export volumes increased by 6 per cent to 9,732 tonnes but had a slight one per cent drop in value to $16.1million. The majority of exports went to New Zealand, while at the same time, no fresh pear imports were recorded into Australia.