Agriculture Victoria recently tested a new portable handheld infrared meter (HIKARi 16) that non-destructively measures sugar levels in fresh cherries. Comparisons were made with a refractometer that requires destruction of the fruit to obtain a juice sample. Laboratory results showed that the infrared HIKARi 16 was reasonably accurate and has the potential to replace a refractometer.

Sugar levels in cherries are traditionally measured as soluble solids concentration (SSC) using a refractometer and expressed as °Brix (where 1 °Brix = 1 g sucrose per 100 g juice). Modern refractometers are digital, but they still require a juice sample to measure the SSC. The infrared HIKARi 16 was designed to provide several practical advantages over the refractometer.

Measurements are rapid, fruit remains intact avoiding messy juice sampling, and the activation button is easy to access when taking measurement of cherries attached to the tree and in the packhouse.
The HIKARi 16 works best when the fruit and instrument are both at ambient temperatures, the surface of the fruit is dry, clean and free from blemishes or bruises. To test the infrared HIKARi 16, six batches of fresh cherries were sourced from a local retail supermarket and directly from growers in Victoria. Three SSC measurements were taken on opposite cheeks on 20 to 25 cherries per batch, firstly with the non-destructive infrared meter (Atago PALHIKARi 16; Figure 1A) and then on juice samples with a refractometer (Atago PAL-1; Figure 1B) and the average SSC calculated. 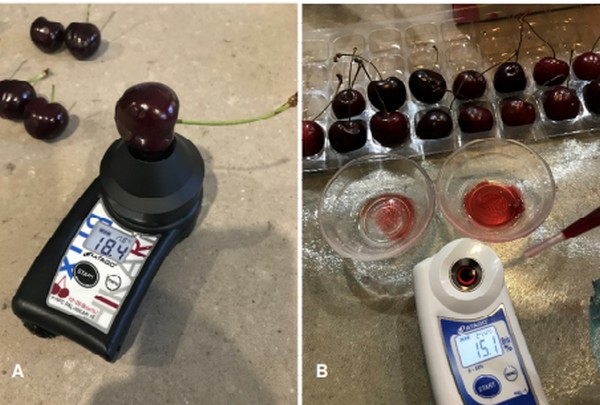 Atago pocket instruments used to measure soluble solids concentration in fresh cherries; non-destructively by infrared (A) and destructively on juice by refractometry (B).