The Spanish Citrus Interprofessional (Intercitrus) claims that the rate of entry and settlement of foreign pests in the Spanish citrus sector -some as destructive as the cotonet from South Africa (Delottococcus aberiae) or the Trioza erytreae (already detected in the citrus growing area of the Portuguese Algarve)- is unsustainable. The data back this concern. Citrus imports from third countries have been growing steadily, as have European port interceptions due to pests, and this situation has facilitated the entry of 15 citrus pests from other parts of the world into the Iberian Peninsula since the beginning of the 21st century.

Every year and four months, the Spanish citrus sector identifies and suffers the impact of a new destructive pathogen, and this is happening at a much higher rate than in the second half of the twentieth century, when only 9 foreign pests entered; mites, insects or bacteria that at the time escaped the phytosanitary controls in the ports. The interprofessional warns that such a situation, aggravated by the European restrictions on phytosanitary products, should lead the European Commission (EC) to impose the application of cold treatment in transit on imports from third countries. 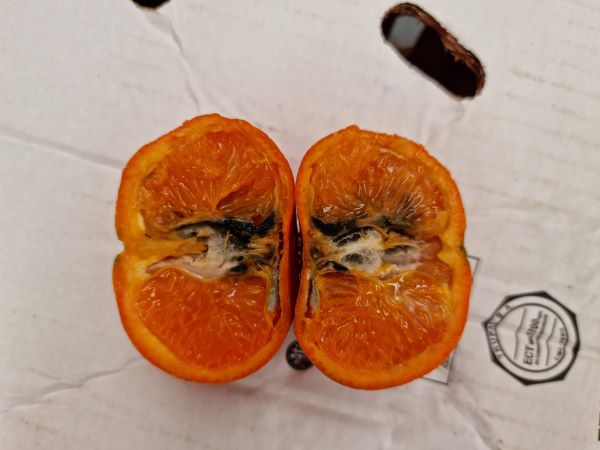 Intercitrus basically agrees with what was stated in a recent letter from the Minister of Agriculture, Luis Planas and the Minister of Trade, Reyes Maroto, addressed to their European counterparts -Commissioners Janusz Wojciechowski and Stella Kyriakides-. In this letter, the Spanish government asks for citrus to be considered a 'sensitive product' in the next revision of the trade agreement with Southern Africa, as well as to enforce the application of cold treatment in transit to imports from countries where the quarantine pest Thaumatotibia leucotreta (FCM, False Codling Moth) is present, starting with South Africa.

The measure would be nothing extraordinary. It is included in international plant health standards and, in fact, the same measure is applied by almost all citrus-producing countries to protect their plantations from certain pests such as the one mentioned above (such as the US, China, Japan, Mexico, India, South Korea and Australia). It is also the system that those same authorities force Spanish exporters to comply with in order to guarantee that no viable Mediterranean fruit fly larvae reach them.

The cold treatment would make it compulsory for non-EU operators working with the EU to subject their citrus fruits to temperatures close to zero degrees for a certain period of time while in transit by ship to Europe. The need to apply such a treatment has also been backed by two recent reports of the EFSA (European Food Safety Authority). The official scientific body of the EU analyzed the effectiveness of the 'systems approaches', freely chosen by Israel and South Africa to mitigate the risk of entry of FCM in citrus exported to the EU. These were implemented by both countries as an alternative to circumvent the cold treatment. The result confirmed that neither country complied - not even by a close margin - with EU regulations, which require the product to guarantee freedom from the pest, whichever option is chosen.

On September 16, the General Assembly of Intercitrus elected Sanfeliu (from Colegio privado y Afines, represented by the Citrus Management Committee, CGC) as its new president for one year. She took over from Ramon Espinosa (from ASAJA). In her inaugural speech, Sanfeliu made it clear what the main targets were during her mandate: defending the plant health of Spanish and European citriculture and demanding reciprocity to the EU authorities, so that the oranges and mandarins grown in the EU can compete in the European market under the same conditions and requirements as those imported from third countries.

Intercitrus denounced "the worrying loss of competitiveness that Spanish citriculture is suffering in the European market against the supply from third countries," such as South Africa, Egypt, Turkey or Morocco, among others. The event was closed by the Director General of Agrifood Industry of the Ministry of Agriculture, José Miguel Herrero. Sanfeliu took advantage of his presence to ask him for an urgent meeting with Planas. "Now that the Government seems to be determined to demand the cold treatment, it would be appropriate to join forces and work hand in hand with the interprofessional in order to make it happen."

A new analysis conducted by Intercitrus also confirms the logical connection between the number of annual port interceptions caused by the presence of pests in citrus from third countries and the increase in the volume imported from such sources. As shown in the table below, in 2020 the number of rejections for this reason increased by 82% and the imported tonnage increased by 11.9%, in both cases compared to the average of the last 5 years. 2020 was unusual because it was marked by the 'COVID effect' that gave a boost to citrus demand and, on the other, by the situation caused in Argentina by the local rainfall and humidity.

"Every year, a different large citrus supplier has to deal with a significant impact of phytosanitary problems. In 2020 it was Argentina, but before that it was South Africa, Brazil or Uruguay. On other occasions, it is the authorities of these countries that order the suspension of shipments to Europe when they have almost finished their campaign, because they know that their controls are not working and prefer to do that before Brussels takes action."

Intercitrus recalled that it is the responsibility of the European Commission (EC) to ensure that the plants and plant products shipped to the EU are free of pests. The interprofessional has a clear idea about how to prevent their spread. The process should begin at the place of production of these plants or fruits, with the registration of production plots and their units, the treatments and other agricultural measures in order to guarantee their traceability. This should be complemented by appropriate inspections in the exporting country during production, intensified sampling procedures and prior communication to the European authorities of the aforementioned list of plots and production units, all backed by an official phytosanitary certificate. Also, the EC should regularly verify the system with appropriate import audits.

Depending on the harmful organism in question associated with the country of origin of the exports, cold treatment should be required, usually in transit. "All these measures would be included in a phytosanitary export protocol, which is exactly what is being imposed on us after slow and complex bilateral negotiations between Spain and non-EU countries to be able to export our citrus to non-EU citrus producing countries," said Sanfeliu. 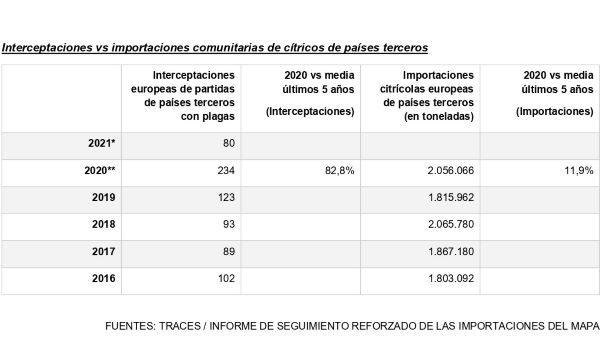 *Latest available data. No data are available for the same January-August period, neither of interceptions, nor of imports.
** Interceptions in 2020 broke all records. That year's anomalous results were due to the situation in Argentina, with unprecedented interceptions figures as a consequence of unusual rainfall and humidity, which facilitated the spread of the Citrus Black Spot fungus, as well as many other fungal problems. So exceptional was this country's shipping campaign that the EU suspended the imports of Argentinian citrus between September 26, 2020 and April 2021. Almost a month earlier and as on previous occasions, the Argentinian SENASA had already agreed with the sector to limit exports by banning lemons.