It is the beginning of September. And Marius Jansen of JJK Uienhandel is optimistic about the Dutch onion season's progress. "We thought we'd have an abundance of onions. That's why everyone thought prices would be dismal. But now, volumes are down. That's due to a combination of heavy rainfall, mildew, and leaf spot disease. We can adjust our forecasts, so the mood is much better. The market seems much more positive too," he says. 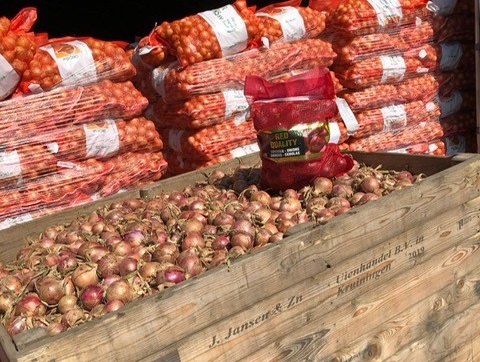 JJK focuses on sorting and packing onions for exports. It also directly supplies industry onions to Eastern Europe. Last year, the company took over a nearby onion trader. A step Jansen has not regretted for a moment. He runs the company along with his brothers Pieter and Henk and son Jaco. "It wasn't so much about the extra capacity. It was more about expanding our services."

"For example, we now sort a lot more red - and to a lesser extent pink - onions. The great thing is that we're fairly busy throughout the year. We don't turn any orders down. Other packers specialize mainly in Africa. But we do all kinds of packaging, from yellow to red and pink. This is beneficial in the second half of the season. If you're there when it's busy, you get orders later too," Marius explains.

"The start of the onion set season was a bit difficult. It's, however, progressing fairly well now. There were quite a few onion sets left. We're, nonetheless, already loading full shipments for the Polish industry. We've built up a client base there in the last five years. And it's going well. We recently sent 40 truckloads there. It's quite unusual for Poland to already be on the market," he adds.

"The price level allows us to go in all directions and make a little profit. Last year it was more difficult, with a different price level. Hopefully, we'll maintain this good export level at least until Christmas. In recent years, the season's latter half has generally been somewhat tougher. But slightly lower prices also mean opportunities for that second half."

"Farmers are, however, holding on to their onions. It's the middle of the off-land season, yet there's not much supply," Marius remarked in early September. The onion packer keeps a keen eye on optical sorting developments. "We're a little skeptical about that. For now, we don't see much advantage to switching over. But I'm sure this development will continue. The new machines with their robotic arms take up much less space and that makes it very interesting," he concludes.