“With the RubisGold, we wanted to create a family collective with the greatest apple specialists”

Last Thursday, a new variety of apple, the RubisGold, was presented at the Vergers de Séru. “The objective of the day was to highlight this new apple and introduce the collective of specialists and marketers representing it,” explains Jean-Christophe Bertin, director of Earth Market. 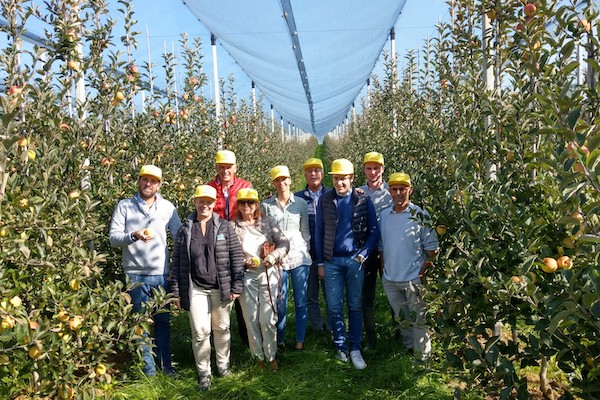 The RubisGold, a yellow innovative apple
The adventure begins in 2011. A Belgian nurseryman, Johan Nicolai, and his children focused on obtaining a tasty yellow apple by crossing the Delblush, a very aromatic but complicated apple to produce, with the Pirouette variety which has great agronomic qualities. This is how the RubisGold was born, “Rubis” for its promise of taste, and “Gold” to value its yellow color.

“It is a really innovative product, because it is a golden yellow apple that is crunchy, aromatic and that can have an orange blush in certain conditions, which gives it a unique coloration. We all know that it is not easy to convince the consumer with just one purchase. But this time, we have a very distinctive apple. With an equally unique packaging and a promise of taste that is truly special. The first feedback from retailers, especially Grand Frais, is very positive. The study conducted by CTIFL is also very promising. We have the feeling that with this apple, the planets are aligning. Now, it is our job to handle the agronomic part well so that the RubisGold can keep all its promises.”

A technical apple that requires the know-how of great specialists
A true innovation implying agronomic subtlety to match the promises made. For the RubisGold to fully reveal itself, the collective has asked the help of some of the greatest specialists of the apple sector in France and in Belgium. Therefore, although competitors, Les Vergers de Séru, Blue Whale, Alliance Perlim Meylim, Gerfruit and the Devos Group are working together to lift the RubisGold to its full potential.

“It is a very technical apple. That is why we have surrounded ourselves with specialists. These major groups all have in common an economic robustness, complementary terroirs, commercial networks, a taste for challenge and highly specialized technical and agronomic teams. RubisGold is not a yellow Pink Lady. It will have a terroir signature which will be interesting and on which we will capitalize. We will have a typology on which marketers and producers will be able to express themselves.”

“We will need to experiment over several years. It is a demanding apple that likes the cold and thermal amplitudes, needs irrigation, is relatively sensitive to stress and has rather particular storage conditions. On the other hand, it is not particularly sensitive to scab and does not alternate. The objective is not to obtain large yields per hectare but to keep a promise of taste.” 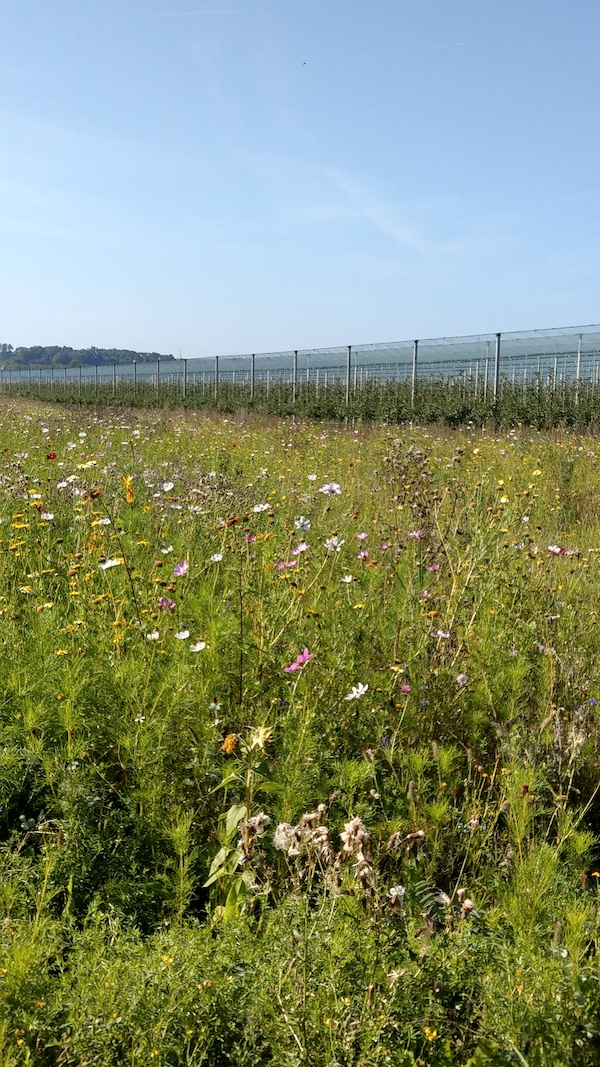 Apple grown in an eco-responsible manner
Besides this promise of taste and coloration, the collective wanted to offer the consumer an apple produced according to environmentally friendly principles. “All the French producers involved in the process are certified Global Gap and HEV3. For the Belgian group Devos, the HEV certification is not a possibility as it is not recognized in the Benelux, but the production techniques used are similar. The orchards are also managed in an eco-responsible manner. Within the collective, we share the same values and principles, and it will also be the case for all European producers that will join us.” 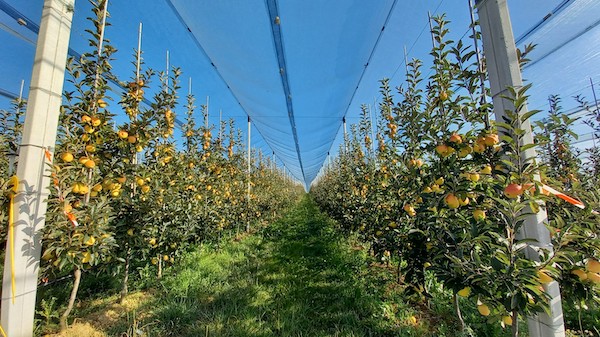 Objective: Planting 1.6 million trees in the coming years
This year, the RubisGold harvest amounts to 700 tons, but eventually, the collective wants to reach 25,000 tons. “We have exclusive rights for planting and marketing within the European Union, Switzerland and Morocco. We are planning to plant 1.6 million trees on these territories, which represents about 500 hectares. To this day, we have already planted 280,000 trees and we will plant 140,000 more next winter. Next year, we will reach 1,200 tons and in two years, 3,000 tons.” 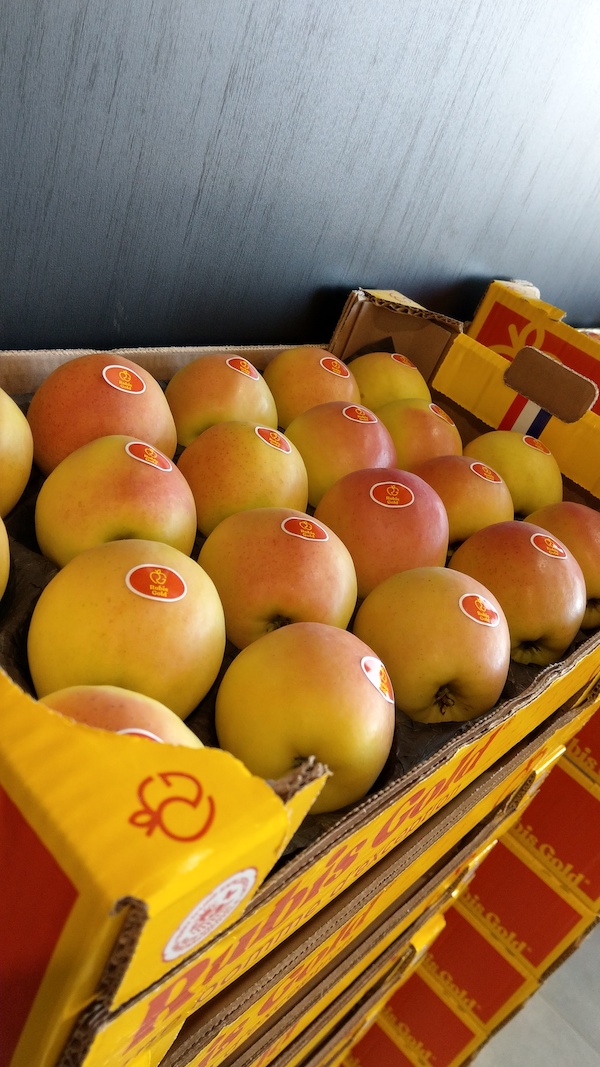 A human adventure above all
“But beyond the volumes, what matters is the state of mind we work in. It is about people and the land. How to make a team grow while maintaining a certain complementarity and without compromising the development of variety. How to make different players from other competing fields trust each other and work together towards a common interest. How to take part in this quest for value and not in a commercial competition. The challenge is to determine who is ‘RubisGold-compatible’, because it is a human adventure above all.” 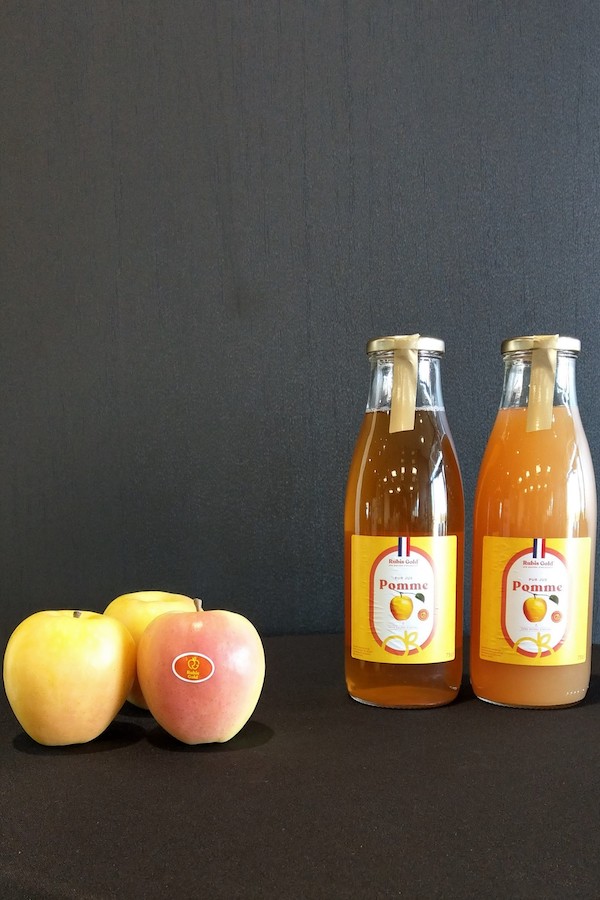 The Devos Group, in charge of developing RubisGold in Belgium and the Netherlands
The adventure in France has already started and it is already looking promising, but the Devos Group has just joined the collective in order to develop the RubisGold in Belgium and the Netherlands. “Devos is a major Belgian marketer with many experts. The production values are the same in all countries, but the commercial challenge differs depending on the region and the crop. In Belgium, consumers are not as familiar with yellow apples, often seen as being too ripe. The group is thus faced with the challenge of finding the right arguments, such as the crunchiness of the apple, that will trigger sales.” Eventually, between 50 and 80 hectares of RubisGold orchards will be planted in Belgium and the Netherlands.

The ambitions for the RubisGold do not end at the borders of Europe. “We’ve already tried it in juice and processed, and we now want to try exporting it in order to see how it keeps. We are also currently identifying the areas where we could produce the variety, in order to know how to place it on the world market. The more we know, the better we will be able to build our common roadmap.”