The arrival of Belgian potatoes is challenging, quality-wise. So says Geoffrey Delbaere, sales manager at Warnez Potatoes. "We're, indeed, getting far more potatoes than the last two dry years. The wet summer caused a lot of rotting during storage as well. That's resulted in plenty of failures when those potatoes were checked," he begins.

"So, at the end of the day, there may be fewer potatoes available than in previous years. What does that mean for pricing? That will become clear once everything's been harvested and the quality's been analyzed. If there are fewer potatoes left, prices will undoubtedly be higher."

Warnez focuses mainly on selling Belgian and some French potatoes to Belgian retailers. "Demand is good. Especially now that the summer vacation's over and schools have started again. We can't complain about sales. The necessary promotions have been planned," Geoffrey continues.

"Last year, there was a significant increase in volume. The hospitality demand had shifted to the supermarkets. People were dining at home much more. But you can't compare this year with last year; it's not representative. All the lockdowns have ended and the hospitality industry is up and running again."

According to Geoffrey, the growth in organic potato sales has stagnated somewhat in recent years. "There is, however, an important development. Farmers are using robust varieties for organic potato cultivation. That's a direct result of the deal retailers, packers, and growers reached. That was in the wet summer of 2016. Phytophthora was plaguing many organic potatoes."

"We were one of the parties who signed that agreement. We're committed to using these robust varieties. That's paid off. This wet summer's proved that these robust organic varieties are much more resistant to phytophthora. We want to further expand this variety package. Then we can offer the same range of organic preparation types as the conventional varieties."

Warnez's number of packaging options has also expanded considerably in recent years. "For example, we can now package in paper as well as plastic. We pack on a roll, so we've increased the paper bags' packing speed. That lessens the price difference from plastic. We also offer biobased plastic packaging made from sugarcane. All this lets us follow our customers' strategy regarding how they want their potatoes packaged - in plastic, bio-based or paper. The client gets to choose," explains Delbaere. 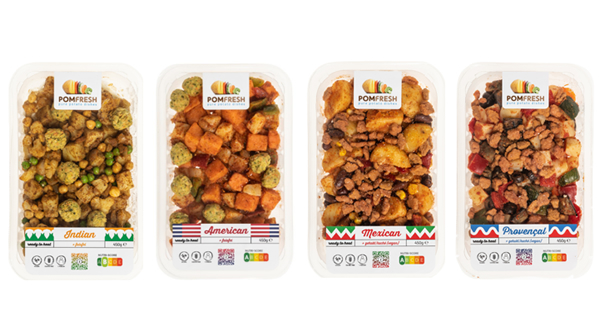 This potato processor has also introduced several new ideas to the fourth and fifth ranges. "For instance, we offer pre-cooked potatoes with herbs. We've launched a world cuisine range too. It has four potato-based, prepared meals. These consist of 50% potatoes, 35% vegetables, and 15% vegan protein sources."

"This line fits right in with the vegan trend. Three of the four meals score NutriScore A; the other, NutriScore B. And that's only because it includes coconut milk. It's a great concept all around. We're not only sticking to our core business - the potato. We're also moving with the times, innovating further in the potato world," concludes Geoffrey. Warnez Potatoes has a stand at Fruit Attraction: Hall 10-E06.