On September 24, 2021, the Supervisory Board, under the chairmanship of Martin Ducroquet, reviewed the statutory and consolidated financial statements for FY 2020-2021 as approved by the General Management and certified by the company's statutory Auditors.

Message from Guillaume Debrosse - Chief Executive Officer:
"The Bonduelle Group recorded another financial year of business growth at constant exchange rates and, despite the sanitary context, retained its profitability. In a consumer environment far different from the one in which the annual targets were set, we demonstrate our resilience thanks to a portfolio of diversified business activities in terms of technologies, distribution channels and geographical areas."

Revenue
At €2,778.6 million, the group's revenue for FY 2020-2021 (July 1, 2020 - June 30, 2021) is up by + 1.6% on a like for like basis(1), in line with the objectives announced at the beginning of the FY and down by -2.7% on reported figures. Currency fluctuations had a particularly unfavourable effect this year, reducing the group's growth by nearly -4.3% (mainly due to the strengthening of the Euro against the US dollar, the Russian rouble and the Canadian dollar). 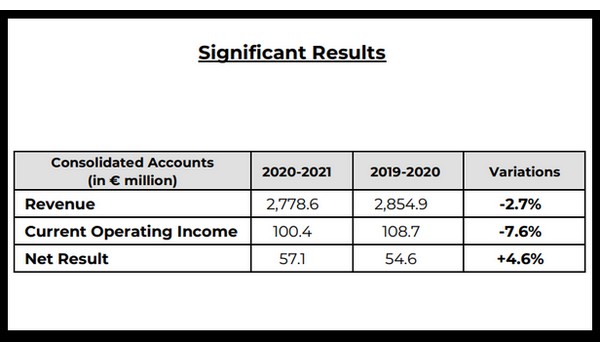 The long-lasting sanitary crisis on the one hand, source of additional costs (disinfection, adaptation of organisations, productivity...) and on the other hand, the operational difficulties partly linked to this same context faced by the fresh business segment in North America - additional logistical costs, inflation, labour shortages, climatic incidents, fires, illnesses impacting the raw material - had a negative impact on the current operating result of this financial year, the latter overshadowed an otherwise solid performance in the long-life operating segment in Europe, Russia and Eastern Europe, as well as in North America.

Despite this context, the group continued its policy of developing its brands with an increase of more than 10.-% in marketing investments and the ongoing deployment of innovations (Without Pesticide Residues range, etc.).

After taking into account non-recurring items (€ 3.2 million) linked to the various restructuring operations that took place during the year (takeover of the assets of the France Champignon Cooperative...), the Bonduelle Group's operating income stands at € 97.2 million,  compared with € 101.9 million last financial year.