In Austria, the main harvest usually starts in mid-August. However, a wet and cold May delayed the growth of the fruit, so that the first significant volumes of new crop were harvested at least 10 days late, depending on the location. The quality of the first batches was quite satisfactory. The fruit sizes of the early varieties Gala and Elstar tended to be small. There is still conflicting information on the final harvest volume, although market participants are forecasting at least the previous year's volume (160,000 t) with a positive outlook. It is important to wait and see how the harvest progresses.

The AMA wholesale prices ex ramp had, in anticipation of the new volumes, recently weakened somewhat. The representative apple price for August was valued at 0.76 EUR/kg and thus lost about 8% compared to the previous month. The nationwide inventory of dessert apples as of August 1 amounted to 11,003 t (organic & conv.) and thus the warehouses were effectively cleared, except for the Golden Delicious variety.

At the European level, the available data on this year's apple crop is becoming more concrete. Harvest volumes of 11.6 - 11.7 million t are expected for the 2021/22 campaign (some 10% above last year, 5% above the 5-year average). While a large part of the producing countries will produce slightly above or at the previous year's level, Poland will bring 4.2 million t (+22% year-on-year) to the EU domestic market again this year. After two years of calm, the coming season will therefore again be a challenge for export-oriented domestic marketers. Not least because the production of Germany, Austria's main target market for dessert apples, with 1.08 million tons, + 6% compared to the previous year, is in the upper range of the past years. The pressure could increase. 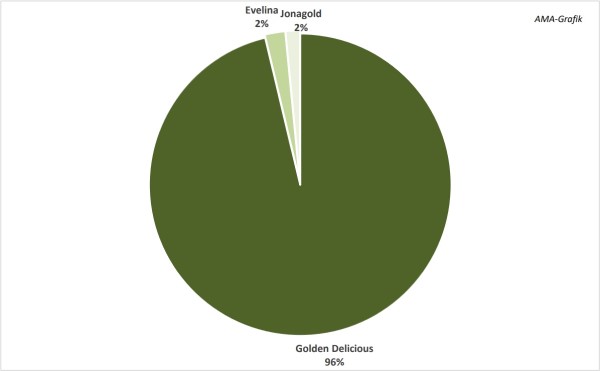 Marketing of domestic winter onions was largely complete in August. Meanwhile, harvest progress for summer onions was bumpy due to weather conditions. Again and again, harvesting work had to be interrupted due to numerous rainfalls. Nevertheless, the supply of summer onions continued to increase, even though the reported yields per hectare remained within limits. The Lower Austrian producer price for loose onions, sorted in boxes continued at an average of 20.00 EUR/dt,15% below the previous month's level.

Domestic potato yields satisfactory, qualitative uncertainties in storage varieties
Before the start of the domestic storage period, quite satisfactory yields were reported, i.e. harvest expectations were described as quite positive despite massive regional hail events. From above-average results in the late areas of Upper and Lower Austria to less than 30 t/ha in the dry areas of the Weinviertel, everything seems to be there this year. However, quality problems and pest pressure due to rot, twig growth, hollow heart and wireworm could decimate the storage capacity and thus the net output in the long term. In August, the Lower Austrian connecting varieties were priced at an appealing level with an average of 20.00 EUR/dt. The weak yields in Eastern Europe and the Balkan countries could open the doors for potato exports of domestic origin this year.

Total production of the largest Western European producing countries (PL, DE, BE, NL) for ware potatoes is expected to be around 22.4 million tons (497,700 ha). This is less than last year and mainly due to reduced acreage (- 4.6% yoy), but still close to the 5-year average. As in Austria, there are still many uncertainties regarding quality (rot, hollow heart, growth cracks, etc.) as well as harvest conditions and storability. A relatively large difference between gross and net yield is expected. With the quality problems and a questionable suitability for storage, the medium-term outlook could well provide for rising commodity prices (fries & co). The price movements of the EEX (European Processing Potato Futures) already indicate this. Currently, the highest price for the April 22 contract was 19.50 euros/dt (as of 21.09).