Pecan season is just around the corner, and a small operation in Goldthwaite, Texas, is preparing to make some big deliveries.

“Right now, what we’re doing is watching for any bud problems we may have coming late in the season and cleaning the orchards up to get ready for the nuts to start falling,” said Joe Brooks, general manager at Pecans.com.

“Most varieties will start falling either this week or the next. The farms will be gathering them probably in three weeks or so. Once that occurs, the farm will pre-clean and dry them to prepare the pecans for processing. As of now, that is the status in the pecan industry.”

Brooks said that it’s still a bit early to compare this year’s harvest with last year’s, but he is optimistic that, unless an unprecedented natural disaster occurs, the numbers will be comparable to the high numbers they’ve been experiencing year after year.

“There’s always a disaster that can happen in the pecan industry just like in any farming operation,” he continued. “Mother Nature can sure be unpredictable sometimes, but we’re very optimistic that there will be a pretty good crop.”

The Texas summer months were unusually mild this year, especially compared to the rest of the country. Brooks feels like the cooler temperatures and extra rainfall will bode well for this year’s pecan harvest. Only time will tell. 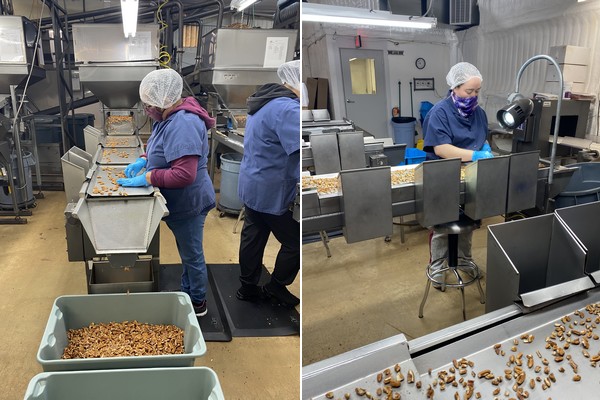 Large demand for a small company
The company not only maintains its own orchards that it distributes to regional retailers, but they also buy from other suppliers to make pecan-related products that are shipped throughout the United States.

“[Owner] Dewayne McCasland has several pecan orchards,” said Brooks. “We also buy our pecans from other growers in the region and process them from inshell all the way down to finished product. As well as working our pecans, we also do this process for other growers.”

Brooks also mentioned the addition of more stringent food safety measures, and what they are doing in order to ensure that those standards are met. “In 2018 we added a SQF Practitioner, Jessica Seward, to ensure that all of the food safety guidelines necessary for SQF were completed and maintained. Pecans.com is now a certified SQF food manufacturer with the addition of Kosher, and Organic.”

He added that a couple of the biggest logistical challenges that Pecans.com faces are the labor shortage that many other businesses have been dealing with, as well as the overall competition of pecans in central Texas being incredibly high. Even with a labor shortage, the operation is still in full swing, ready to exceed expectations. “We are very proud to employ 29 full-time personnel in our small community,” he proclaimed.