South African onion market under severe pressure due to oversupply

It’s been a difficult season for onions, which is yet another crop affected by the heavy rain in January and February in Limpopo Province. This region currently supplies 84% of South Africa's onions, the Brits region (Northwest Province) bringing up another 12% and 3% from the Free State.

Limpopo onion producers planted more onion hectares because of good water availability, as a result of the good rains, but on the other side of the coin high humidity in January and February caused higher pest pressure with concomitant quality problems.

A number of compromised onions were sent to market where it started going off on the market floor and the volume of low quality onions on the markets brought down the price. Currently the price is R2.90 (0.16 euro) per kilogram.

The onion price has been depressed for months, and should be seen against a backdrop of consumers under economic pressure.

Koue Bokkeveld exports less to Angola
The Koue Bokkeveld in the Western Cape had a very good past season and as the only region with the required day length to grow intermediate brown onions, they have the capability to store (and export) onions for up to six months, which overlaps with early Northern onions. The very last stored Cape onions are now being sent to market.

Brown Ceres onions obtain a premium of around 20% over the price for white onions from the north, but at the moment the markets are so full that the difference is flattened out to a degree, says an onion trader. 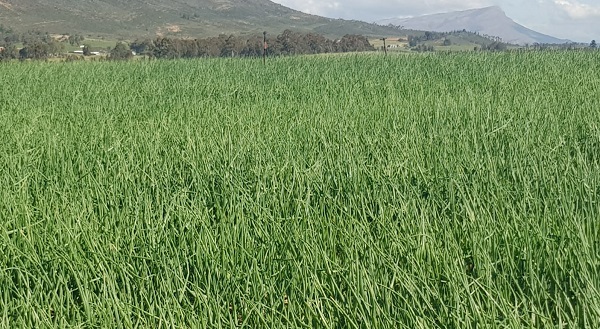 Exports from the Koue Bokkeveld to Angola slightly decreased this year as a result of many factors including currency volatility and forex complications.

Some Ceres onion growers have finished planting while others are planting until the middle of October.