France: The new port of Calais officially inaugurated after 6 years of work

Considered as the largest European port infrastructure project of the decade, the new port of Calais was inaugurated on September 9th, 2021, in the presence of: Louis Le Franc, Prefect of Pas-de-Calais, Xavier Bertrand, President of the Hauts-de-France region, Natacha Bouchart, Mayor of Calais and President of Grand Calais Terres & Mers, Jean-Marc Puissesseau, President of the Straits Port Operating Company.

The extension and modernization of the port of Calais represented an investment of 863 million euros [1,012 million USD]. An innovative financial package combining public and private funding from the Hauts-de-France region, Europe, the Hauts-de-France Chamber of Commerce and Industry, the Caisse des Dépôts and Meridiam. 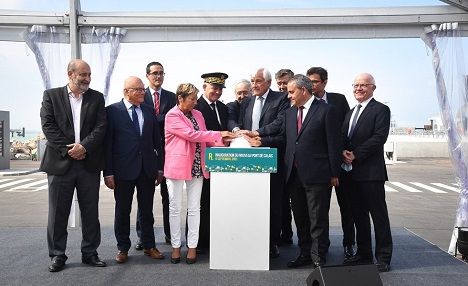 Delivered on May 5th, the port of Calais was officially inaugurated on September 9th. It is scheduled to be commissioned in October. Located at the heart of one of the busiest and most active maritime straits in the world in terms of passengers and goods, the new port of Calais was designed in 2002 on the initiative of the Chamber of Commerce and Industry of Calais, then concessionaire of the port. This extension and modernization project was developed to anticipate and adapt to the evolution of the cross-Channel traffic, to the new-generation ships, the future logistic and industrial needs, as well as to meet the new environmental standards.

With truck traffic which has practically doubled and a cross-Channel freight volume which has tripled over the past 20 years, the infrastructure of the port of Calais no longer made it possible to ensure an optimal quality of service. The port’s capacity limit was reached, so its extension seemed to be essential. Beyond increasing the capacity of the terminals, the challenge also is to accommodate the future generations of ferries that are more than 220 meters long and require longer docking quays and larger basins for manoeuvring.

A reference project in Europe
The extension of the port of Calais includes a dyke of more than 3 kilometers, a basin of 170 hectares, 90 hectares of which are navigable in the first phase, 65 hectares of platforms and routes, 3 new ferry berths and 39 buildings necessary to operate and securely receive port customers. In order to meet the challenges of the ecological transition, the port’s design incorporates the constraints of climate change and strictly respects the commitments to preserve flora and fauna. The new port of Calais represents a fantastic development opportunity for the Calais area and the entire Hauts-de-France region.

Calais, more than a port...
The new port provides the Calais area and Hauts-de-France region with an exceptional tool resolutely turned towards the future. In addition to its extension and modernization, its fusion with the port of Boulogne, its recent quadruple ISO certification and the association of employees in the company shares, unique for a French port, make the port of Boulogne Calais a special model in Europe. The 6 years of work are just a first step: depending on the traffic, the needs of the maritime companies and the way the market will evolve, the configuration of the port will continue in the decades to come in order to meet the cross-Channel challenges by 2100.