This summer was characterized by exceptionally heavy rainfall, wet fields and even hail, locally. This led to a domestic supply shortage for many vegetables. The example of iceberg lettuce and zucchetti shows that there were massive harvest drops, which led to peak prices for Swiss produce and exceptionally large imports for the wholesale trade. Greenhouse vegetables did receive less sunlight, but were far less affected. For example, cucumbers had higher production volumes in July than the 2015-2020 average.

July 2021 was the wettest on record, according to MeteoSwiss. Major vegetable-growing areas such as the Seeland region were also severely affected. Crop losses occurred due to standing water and hail damage, and wet fields prevented further cultivation with machinery. In the following, the direct effects of this phase of bad weather on the market situation in July are examined. The market events of four different vegetables are shown: Two typical outdoor vegetables (iceberg lettuce, zucchetti), and for comparison, one vegetable grown mainly in greenhouses (cucumbers) and one mainly imported vegetable (hot peppers). 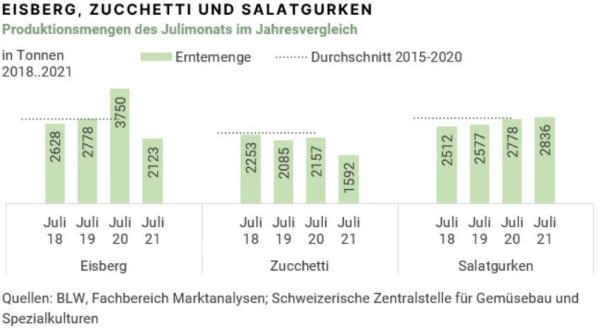 When comparing July production volumes with those of previous years, it is apparent that iceberg lettuce and zucchetti experienced significant crop declines. For example, 2123 tons of iceberg lettuce were produced, about 24% less than the 2015-2020 average. Compared to the exceptionally high-yielding month of the previous year, the drop was as much as 43%. The harvest volumes of zucchetti amounted to 1,592 tons, being some 31% below the 2015-2020 average. 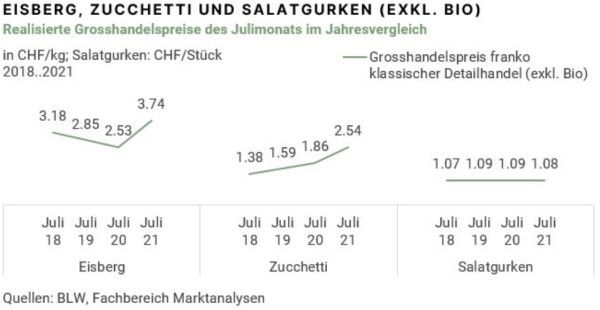