"Little movement in the potato market"

According to the latest report from the Rhineland-Palatinate Chamber of Agriculture, there is little movement on the potato market. Sales turnover in food retailing is relatively quiet despite a reduced price basis. Packers are trying to boost sales with promotions. Under good digging conditions, the tubers could be harvested and the first storage from dry locations could be made. The qualities are described as quite decent, with only isolated problems with wireworm infestation. 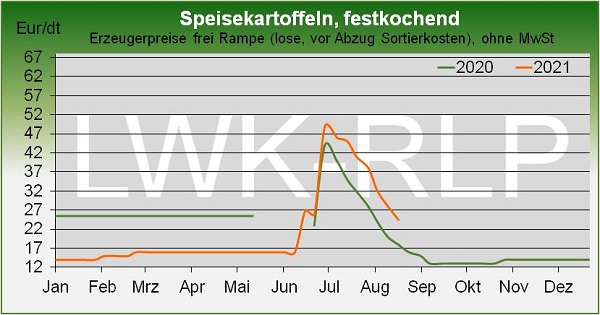 Hesse: Concern about late blight and wireworm infestation
The State Agricultural Office of Hesse also reports that a continuing slow demand characterizes the potato business. Sales remain subdued in the current week as well. Grubbing operations are progressing well, with average yields of around 400 dt/ha. The storage stability of some lots is being critically evaluated. In particular, late blight and wireworm infestation are increasingly causing concern. Some lots are demanding rapid marketing and are being sold with price concessions. Compared to the previous week, prices were taken down by 1 EUR/dt. At least, prices are expected to stabilize due to the limited quantities available. Exports have picked up at an unusually early time. 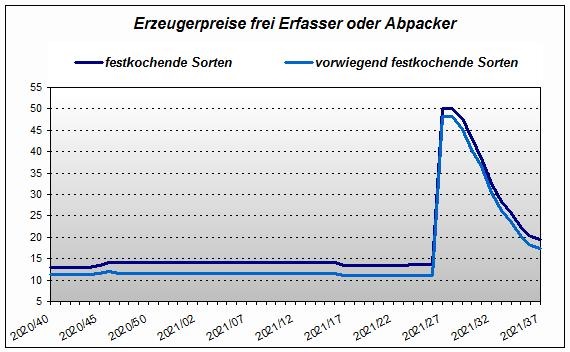 Lower Saxony: yields down
According to the Lower Saxony Farmers' Association, potato harvesting and storage went well. Yields were somewhat lower. Compared to previous years, a lower incidence of worm damage to potatoes was observed; this can be attributed to the regular rainfall.

Schleswig-Holstein: Average to below-average harvests
This week was characterized by good harvesting conditions accompanied by increasing harvest progress, according to the Schleswig-Holstein Chamber of Agriculture. The available volumes are thus continuing to increase. With demand comparatively slow, prices are softening compared to the previous week's level. Here and there, however, individual offers are made with even higher price reductions. These are certainly goods that could not show any storage stability. All in all, average to below-average harvest volumes are reported in this country, which, however, does not cause any concern with regard to the qualities. In the southern states, blight and wireworm infestations could lead to supply pressure.

Export volumes, mainly of oversize towards Eastern Europe and the Balkans are picking up. Sales in the fry market are going well. Hollow-hearted potatoes can currently still be used in processing. On the whole, however, the quality problems with french fry potatoes could lead to stabilization in the food sector.