“Once the summer break is over, our 10 growing rooms, consisting of 1000m2 in total, will be fully occupied and deliver 1000kg of mushrooms a month in total for 4000kg coffee grounds recycled,” says Julie Jacqmain, Production and communication manager at Permafungi. “About four rooms are in use now, as the summer periods are normally a bit slower. We’re really excited to go full-house again.” 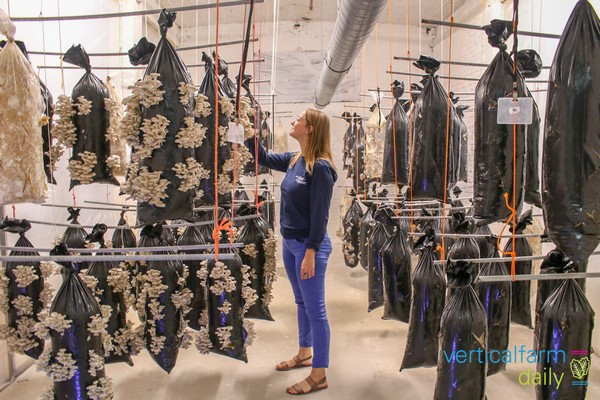 Julie checking on the produce

Located in a former large industrial site, the Tour & Taxis in Brussels, former inventory cellars are now used to flower several fungi that are supplied to multiple restaurants and stores in the city. Permafungi, a fungi producer, started cultivation in 2013 with a simple experiment: growing mushrooms using coffee grounds. Shortly after cultivation had proven successful, Permafungi started supplying several customers in the city. After discovering vacant cellars at the Royal Depot, the company moved into a larger facility to meet the growing demand.

In the left photo, the former inventory site where Permafunghi is located. In the right photo, the growing rooms can be seen

Unique growing style
The bags are hung vertically so all growing surfaces can be used for mushroom cultivation. Every room is filled with many bags which are all oyster mushrooms. Julie explains that it’s the most convenient variety to grow on coffee grounds, especially in these former inventory spaces. As the bags are hanging, we don’t depend on the ground to cultivate so we can occupy different or abandoned spaces. 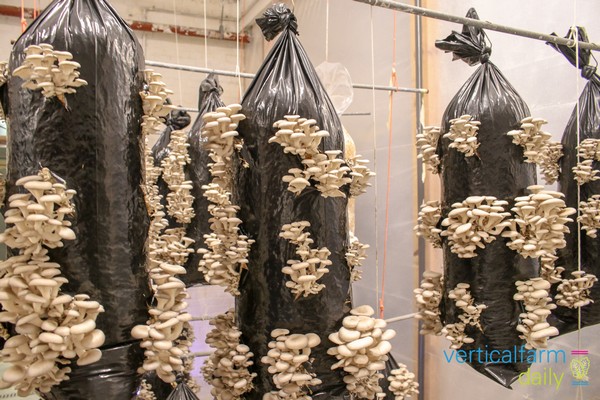 Growing process
Julie explains that before the mushrooms are put to rest and grow, they undergo a whole process first. Coffee grounds, gathered from local restaurants and coffee bars in nearby areas, are mixed with straw and mycelium to create a proper growing medium. Once that’s done correctly, the substance is put into bags and put to rest for two weeks in the incubation room with an average temperature of 21°C Celsius. Then, the mycelium (the vegetative part of a fungus) can start to do its job, decompose and spread. 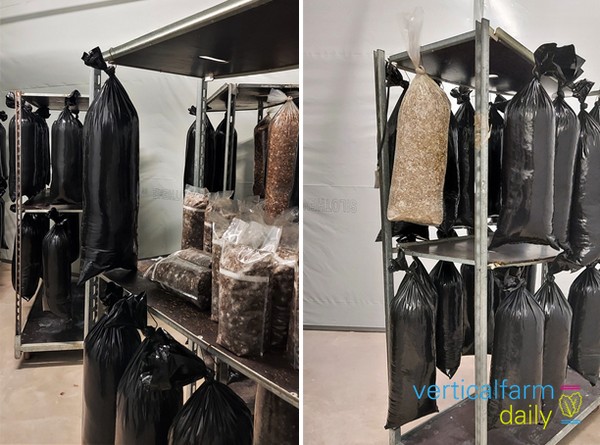 The mycelium eats all coffee grounds and once that’s done, the substance is turned white. After that, the bags are placed into a fruiting room to start the growing process. Humidity levels are put up (80%), lamps are turned on and air vents are active to provide the best growing environment for the mushrooms. After a week, it’s harvesting time and soon the mushrooms are delivered to customers nearby. 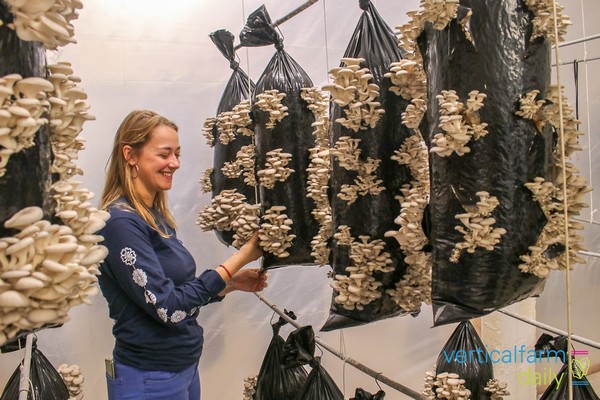 Initiatives taking off
The team is still experimenting with recycling the waste which is left of production. From lamp caps to isolation materials, they found rather creative purposes for it. “We’re looking forward to introducing a new concept to the market once we’ve finalized some projects,” says Julie. The Lumifungi lamp, for instance, is 100% biodegradable, handmade and organic. As of now, the product is still being perfected. Soon they’re expected to be found on the shelves.

Besides offering two kinds of mushrooms, oyster mushrooms and eryngii, growing kits are also available for consumers, so they can get their hands dirty at home. Soon, the company is hoping to kick off tours and workshops at their facility again, educating groups on the fascinating cultivation processes.