“During our Mexican season, we work with five grower partners and pack into the Rico Farms and Aztlan Organic labels,” says Sydney Fairchild of Bridges Produce. “These organic commodities are a critical part of our booth display due to the coinciding timelines of the PMA and the Mexican season. We will also highlight our Fair Trade Program and the benefits it provides to workers and their communities.” Three out of five of Bridges’ Mexican partners are Fair Trade certified and all Mexican commodities are available to pack as Fair Trade.

Back domestically, the extreme heat the Northwest saw this summer has had an effect on many crops, including potatoes and onions. “On onion sizing we are seeing more mediums and less jumbo and overall yields are down. We are seeing sort of the same story on Russet potatoes,” says Kurt Jacobs of Bridges Produce.

Organic potato & Mexican row crop outlook
As for potatoes, everything is still in the ground for Klamath Basin-based Cal-Ore Produce, one of Bridges key potato partners. “We expect to see organic red and yellow and Russet potatoes shipping from Cal-Ore from October into May,” says Jacobs. He notes organic Russet pricing is currently holding steady with volume pricing available on 3# and 5# bags.

As for Mexican row crops, they weren’t as impacted by weather. “We are starting to see the shift from domestic supplies to Mexican crops shipping out of Nogales, AZ,” says Oscar Trujillo of Bridges Produce. “New crop organic cucumbers are starting with strong demand and limited supplies. That will change soon as other shippers start and in October we will be open for ad quote and volume deals.”

Organic zucchini and yellow squash are starting this month with strong demand and next month should see promotional volumes. Following that, each week it will start new items including organic eggplant, hot peppers and then hard squash in November. 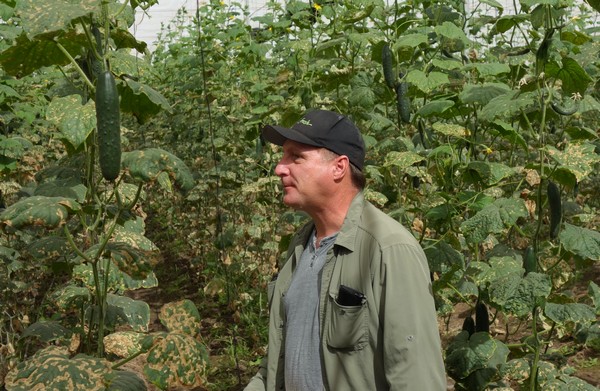 Back to face to face (safely)
Bridges, a longtime PMA exhibitor, will be ready to discuss these items as well as its other commodities and programs at the show.

“We appreciate the opportunity to connect face to face with customers and our grower partners, to show our diverse product lines and meet potential partners. With the show being slightly later than normal, conversations regarding holiday purchasing will be even more critical this year,” says Fairchild.

Some of Bridges’ grower partners will also attend the show. “Conversations between the growers and our customers allow our customers to further connect with people, products and land stewardship their purchases support,” says Fairchild. New to the show this year, Bridges will have its first opportunity to show its cranberry line featuring Patience and Decas labels. (Bridges has partnered with organic Canadian cranberry company Patience Fruit & Co. for many years as its exclusive US sales rep. Earlier this year, Patience purchased Massachusetts-based Decas Farms expanding their offerings to now include conventional as well as organic.)

Fairchild adds that this year is like none other with the challenges the industry and world has seen. “Our thoughts are with those in New Orleans and across the country affected by Hurricane Ida and we hope to have a safe show for all those involved.”