Marketing delay for the 2021/22 campaign

The 2021 French apple production is expected to be clearly lower compared to the average of the past 5 years and also lower than in 2020. In terms of calibers, the smaller sizes predicted are confirmed, especially in Gala, and the marketing of the first apple varieties starts with a delay of 10 days. 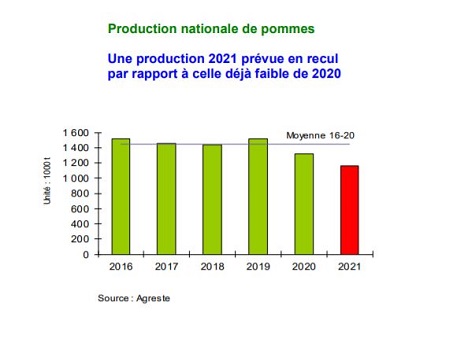 French production reduced by 20%
On September 1st 2021, the French apple production was lower by 20% compared to the 2016/20 average and by 12% compared to last year. The Golden variety is the least affected. Overall, calibers seem to be smaller as well.

The Paca region is faced with a decline in volumes and calibers. The fruit also fell, which increased the losses, in spite of a second blooming phase. The rain and wind episodes that came after the April frost have damaged the fruit. The production seems to be reduced by a third. In the Garonne Valley, the production is 2% lower than last year.

In Languedoc, the frost has reduced the production, which is the lowest in 20 years. In the Rhône Valley, where the frost was the most severe, only half a harvest is expected. The fruits grow and have some color. In the Center-Loire-Valley, the frost has caused some losses but the Golden variety is the one that is doing the best. The harvest will be delayed by 2 to 3 weeks compared to 2020.

Marketing is delayed by 10 days
Marketing for the 2021-2022 apple campaign started with early summer varieties like the Gala in August, with a delay of 10 days. Prices are good.

WAPA predicts the European apple production of 2021 to be higher than in 2020 (+10%) and higher than the 2016-2020 average (+5%). In Poland, leader in apple production, the harvest level is significant after the last 2 harvests (+22% compared to last year and +16% compared to the 2016-2020 average). In Germany and Spain, there is a progress of 6% and 28% in a year, respectively. The harvest in Italy, affected by the frost as well, is experiencing a decline of 4% compared to last year. The European production of Gala apples is up by 8% from last year, reaching its highest level in at least 10 years.

For the 2020-2021 campaign, apple sales are stable at the French national level compared to last year, and 3% higher than the average of the past 5 years. The strong increase in prices compensates for the lower production. However, this average evolution masks a great disparity between the regions. In Paca, sales are up 11% compared to last year, but they are down 17% in Aquitaine.

The French production (1.3 million tons) is 13% lower, reaching its lowest level in 7 years. From August 2020 to May 2021, the French volumes exported within the European Union are lower than last year and also compared to the 2015-2019 average.