The season for peaches and nectarines was on the home stretch, which was clear from the continuously decreasing deliveries. The quality of the products was decreasing as well. Despite the reduced availability, the demand could be satisfied without any effort. Indeed, sales had also become more limited.

As a rule, Spanish offerings dominated the scene. Italian and French goods disappeared from the assortment in the course of the week. Greek products also increasingly disappeared from the market. Turkish imports actually only played a major role in Frankfurt. In Berlin, these were quite popular thanks to their low price of €9 - €12 per 4 kg crate. Nectarines from Albania appeared locally, costing just €1.55 per kg. In general, prices did not change significantly. Here and there, traders were able to raise their prices slightly, provided the organoleptic properties of the fruit were good. However, there were reductions as well, for less than perfect goods. 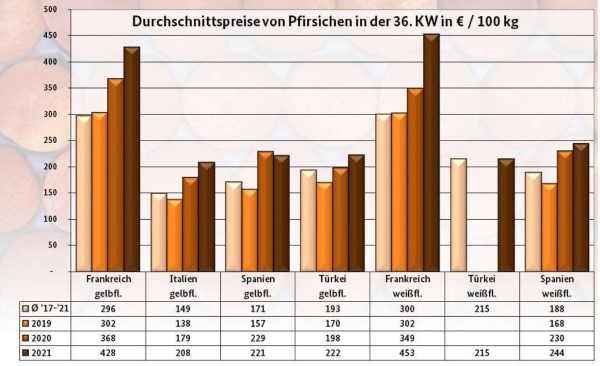 
Apples
Domestic supplies expanded steadily, and supply grew. As a result of the expanded supply, traders were mostly forced to adjust their previous prices.

Pears
Italian and Turkish Santa Maria formed the basis of the supply. In general, however, the demand was rather limited. It could be satisfied without any problems.

Table grapes
Italian offers were obviously predominant. In general, the customer response was quite friendly. Prices mostly remained constant, as supply and demand were sufficiently balanced.

Plums
The assortment was again diversified, with new additions such as local Elena, Fellenberg and Presenta, as well as Italian Stanley. The range was led by Serbian Stanley, followed by domestic Top and Cacak's Fruchtbare.

Bananas
Business was unexciting. Supply was mostly matched to demand. Third-party brands were scarce on occasion, but this did not fundamentally affect prices.

Cauliflower
Local shipments dominated the scene. In some places, Dutch, Belgian and French products were available as well.

Lettuce
Lettuce came from Germany and Belgium. Domestic products in particular had more difficulties regarding their quality, so that they were noticeably cheaper than the competition.

Tomatoes
As before, Dutch and Belgian shipments predominated. Demand was satisfied without difficulty.

Sweet peppers
Dutch shipments dominated ahead of Turkish and Belgian ones. In general, prices tended downwards rather than upwards. Green items were mostly the most expensive.