The first Primofiori lemon harvests of the 2021/2022 season are already starting this week in the Region of Murcia, the main citrus production area in Spain.

After a 2020/2021 campaign with a record harvest, Ailimpo (the Interprofessional Association of Lemon and Grapefruit) predicts that the Spanish harvest will fall to around 1,035,000 tons; a 23% drop that is linked to the impact of adverse weather in 2021. 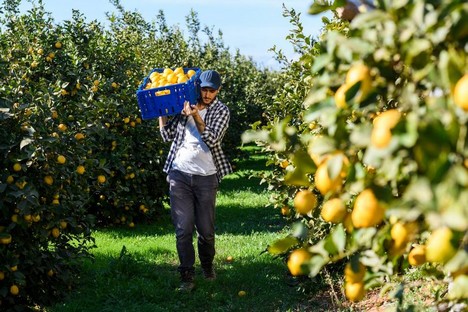 "We have already started harvesting the first fruits and we expect to start exporting from the first week of October, and with consistent quantities from the third week of October," says José Antonio García, director of Ailimpo. "We will be delivering a fresh product with sufficient firmness and juice quality," he says.

Although the markets still have stocks from the southern hemisphere, especially from South Africa, the director of the interprofessional organization is confident that there will not be a strong overlap with the new Spanish production. "The lemons imported from the southern hemisphere belong in another product category. They are softer due to their over-ripeness; an old product in terms of freshness and quality. We, on the other hand, will be delivering a lemon that will stand out for its freshness," he says. "Therefore, it will make little commercial sense to extend the overseas lemon campaign in October, when Spanish lemons are already available. The whole sector has to work to ensure an orderly transition between the two hemispheres."

Meanwhile, Turkey is recovering its usual volumes of Interdonato lemons this year after last year's drop in the production. "In the coming weeks, we will see how much of an impact the increased presence of Turkish lemons will have on the European market, especially in Eastern countries. However, Turkish exporters still have a problem to solve, since last season many batches of Turkish lemons and grapefruit were rejected in controls due to the detection of residues of Chlorpyrifos, Prochloraz, Chlorpyrifos-Methyl, Pirimiphos-Methyl and Buprofezin in concentrations that exceeded the MRL (maximum residue limit) established by Community regulations."

The improvement in the health crisis situation is also leading to more optimistic forecasts being made for the marketing. "We are hopeful about the recovery of consumption in the food service channel. Also, the slight decline in the Primofiori lemon production could help sales be under less pressure. We hope to maintain lemon consumption rates, which have already increased in the last two seasons in Europe due to the Covid effect," says José Antonio García.