"Starting this week, everyone will have mangoes as a seasonal fruit on the shelves"

Based on the first few weeks of the mango campaign, prospects are good for the Spanish season, which kicked off in late August with the harvest of the first Tommy Atkins, and which will last until November in the region of Axarquia, in Malaga, and the Costa Tropical of Granada.

"A good season is expected. We foresee a slightly greater production than in previous campaigns, with an increase of up to 20%. It is true that we expected an even larger production than the one we'll get in the end, but the survey we have done among our suppliers and in the field leads us think that there is going to be more fruit than last year," says Patricia Romero, head of the commercial department of the Malaga-based company Axarquia Tropical. "This is positive, because there will be enough product available to meet the needs of all customers and prices will not rise too much in the markets, which sometimes causes a bit of tension between customers and suppliers." 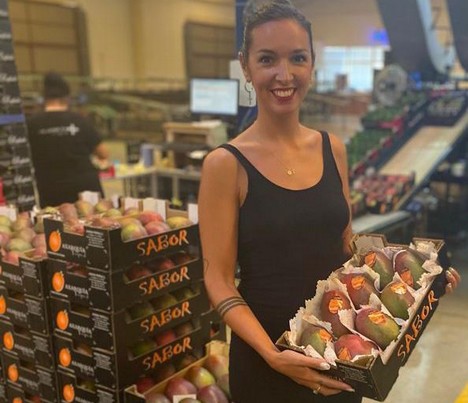 Spanish mangoes will share the shelves with fruit from Brazil and Israel, but with the advantage of being a domestic product, grown close to its target market, which results in a differentiated quality compared to the competition.

"The quality of the mangoes from overseas varies greatly, as these require a transit period of almost 30 days that has an impact on the fruit's qualities, while a mango from Malaga is harvested a week before being consumed. And that is noticeable in the flavor.

"Most retail chains appreciate this," says the professional. "Some are inclined towards the cheapest price; they do not prioritize the quality of the fruit as much, but they manage to be competitive for the end customer. However, many others, and especially the big ones, increasingly prioritize good quality to ensure the consumer repeats their purchase. Supermarkets have usually been criticized a lot by saying that the fruit on their shelves isn't of good quality, and these chains are committed to change that perception. In the end, this always pays off."

The first mangoes harvested in Malaga have been of the Tommy Atkins variety; the earliest in the province, which arrive before the Osteen. "The truth is that Andalusia's production of Tommy Atkins mangoes is small. The Tommy Atkins is a good variety, but it has the reputation of being a stringy mango because of the mangoes of this variety coming from overseas. The Tommy Atkins grown here are very good. They taste very good and contain less fiber, but the name is tainted," says Patricia Romero. "The Tommy Atkins campaign is very short and we quickly move on to the Osteen, of which we produce quite a lot. That is what the customers are used to. That season will last until the end of October. We will finish in mid/late November with Keitt mangoes."

According to the expert, at this moment, the big buyers, especially the supermarket chains, are starting to check out the situation in the mango market. "There isn't yet a great demand or active purchases, but I expect that starting this week everyone will start having mangoes as a seasonal fruit on the shelves," she says. "Now the entire harvest is in the field and it makes no sense for prices to change, but they likely will a little by the end of September or early October, as supermarket chains also usually organize promotions at that time and that tends to stimulate the market a little," says Patricia.

Good quality in the sweet potato campaign
Sweet potatoes are another seasonal product at the moment, with a demand that, like that of mangoes, has shown an interesting trend in recent years.

"Sweet potato consumption is increasing every year, and the production is growing at the same time. This year, we expect some pressure on the supply at national level, mainly from the Cadiz area, which is where most of the crops are located. However, in the farms we have visited and in those where the harvest has already started we are seeing a very good quality and, in terms of volume, we expect a campaign similar to previous ones."

"We started in mid-August with the campaign and now, in September, the season is already reaching its peak. Many supermarket chains have started buying Spanish sweet potatoes," says Patricia Romero.