The strawberry campaign ended unspectacularly. Deliveries from Germany, the Netherlands and Belgium decreased more and more. The quality of the fruit was not consistently convincing, with divergent coloration. A certain degree of customer saturation could not be denied at this point in the season, as sales had become noticeably limited. As a result of inconsistent organoleptic properties, a wide price range was established in some places. In Frankfurt, for example, one had to pay 1.50 to 2.60 € per 500-g bowl of local produce. Small berry products from the Netherlands cost only €1 per 500 g there. In the course of the week, it was generally possible to clear the last stocks. 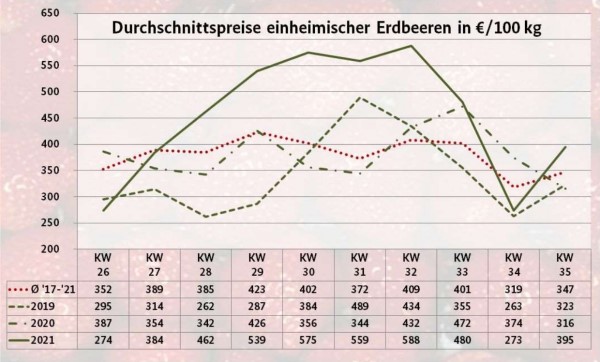 Apples
The market was dominated by domestic new apple products. In general, demand could be met without any effort. The prices tended to drop a bit.

Pears
Santa Maria from Italy and Turkey dominated. Overall, as a result of extended availability, distributors were often forced to adjust their previous prices downward.

Table grapes
Demand grew and slowly shifted away from stone fruit again; it could therefore be described as quite friendly. The sunny weather also improved sales possibilities.

Plums
Local shipments dominated the scene. The presence of Hauszwetschge and Cacak's Fruchtbare increased noticeably, while that of Top and Auerbacher expanded just a little.

Lemons
Mostly South African and Argentinean offerings dominated. There were both reductions and increases in prices.

Bananas
The provision of the ripening facilities usually harmonized with the accommodation facilities. Consequently, distributors rarely had reason to change their existing prices.

Cauliflower
Domestic goods dominated the scene. Availability was sufficient to meet the demand.

Cucumbers
The assortment consisted of German, Dutch and Belgian items. Although the availability was sufficient to meet the demand, nevertheless, prices fluctuated quite strongly.

Tomatoes
Belgian and Dutch unloadings predominated. The assortment was wide, and deliveries had again increased. Demand could not always keep pace.

Sweet peppers
Demand was adequately satisfied with dominant Dutch and complementary Belgian articles. Customer interest was not particularly strong and could be satisfied without difficulty.