Florida: All citrus acreage down 3 percent

Results of the annual Commercial Citrus Inventory show total citrus acreage is 407,348 acres, down 3 percent from the last survey and
the lowest in a series which began in 1966. The net loss of 12,104 acres is 955 acres more than what was lost last season. New plantings at 10,448 acres are up from the previous season. All citrus trees, at 59.7 million, are down 1 percent from the previous
season.

Of the 25 published counties included in the survey, 24 recorded decreases in acreage while 1 county showed an increase. Indian
River county lost the most acreage, down 1,681 acres from last year. For the third consecutive season, Desoto County records the most
citrus acres at 66,638 acres. 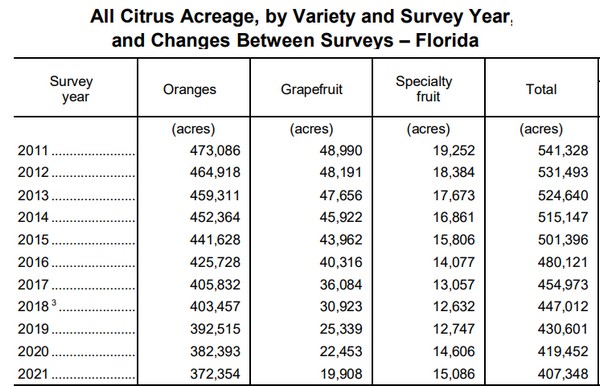 Specialty fruit acreage, at 15,086 acres, is up 3 percent from last season. Tangerines and tangelos account for 63 percent of the
specialty fruit. The remaining acreage includes true lemons and other citrus acreage, with a total of 5,537 acres, or 37 percent. 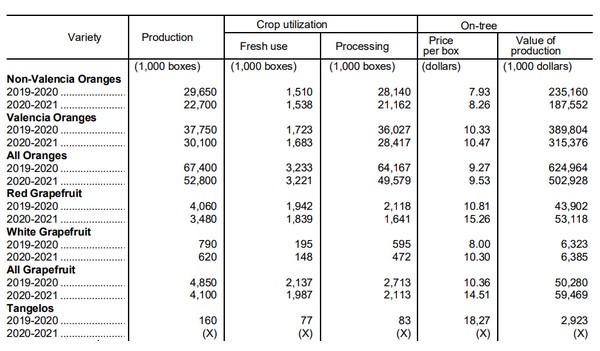 The USDA also issued a revised paper of a page, originally part of the July 2021 release. Revisions to the 2020-2021 bearing trees have led to the recalculation of yield components. Original numbers have been struck out with the revised figures placed to the left where applicable.