As ports and associated logistics systems struggle to keep up, delays at ports are soaking up capacity. This is causing frustration on the shippers’ side and leaving carriers struggling to keep up, all the while making record profits.

Over the summer, freight rates and port congestion levels continue to reach record highs. Port closures caused by Covid-19 outbreaks on the export side as well as capacity problems on the import side are all contributing to ships getting stuck in record-breaking queues. At the same time, they are missing planned port calls, sometimes by weeks.

At the end of August, over 40 container ships were waiting to berth outside the ports of Los Angeles and Long Beach alone, with 90% of those arriving at a port having to wait at anchorage before a berth became available. Covid-19 disruption at major Chinese and Vietnamese ports have also resulted in long queues of ships waiting in this part of the world. In other cases, liners actively avoid certain ports in their schedules. 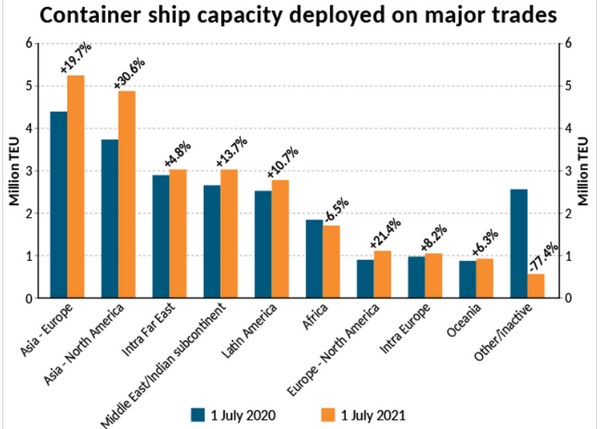 According to an article on hellenicshippingnews.com, capacity on the Far East to Europe trade has risen 19.7% over the past year to 5.25 million TEU, while capacity on the Far East to North America trade has risen 30.6%. Even with these extra ships, shipping companies are struggling to meet their scheduled departures, which leads to cancellations of sailings or port calls because the supply is not there rather than due to a lack in demand.