Every day, drivers on the A7 have been able to follow progress on the construction site of the new tegut... logistics center in the "Hessisches Kegelspiel" logistics park in Hünfeld Michelsrombach. Numerous construction machines have been in use since the groundbreaking ceremony in September 2020, removing and relocating some 570,000 tons of loose rock and almost 500,000 tons of solid rock in order to level out the slope of the hillside site by means of embankments and supporting structures. On September 3, 2021, the building owners of tegut... together with the general contractor Max Bögl and many officials laid the symbolic foundation stone for the building construction. 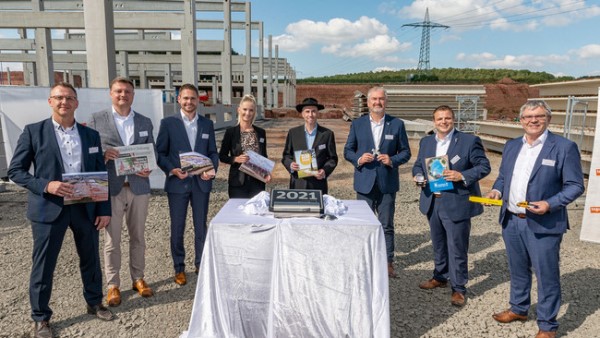 "We are delighted with the progress and are ourselves fascinated every day by the dimensions the construction site has taken on," said tegut... Managing Director Thomas Gutberlet at the laying of the foundation stone. "During the planning process, we deliberately said that we wanted to position ourselves for the future and, with this new building, create the necessary infrastructure and additional capacity to safeguard the company's growth. Both of these goals are already clearly visible at this early stage of the construction site."

But it is not only the capacity of the construction site and the progress of construction that are impressive, the figures behind the mega-project are also gigantic: after completion, over 800 employees will organize the management and delivery of around 17,000 different articles in the new logistics center on a building area of over 90,000 square meters. Automation technology will provide additional support for future processes: The new building will have an automated high-bay warehouse with approximately 38,000 pallet spaces and a container warehouse with approximately 85,000 container spaces. In total, tegut... is investing an amount in the lower three-digit million range in the project.

Hünfeld's mayor Benjamin Tschesnok was also impressed by the construction progress at the laying of the foundation stone: "Such a mega project can only be successful if everyone pulls together. As the location city, we are happy to do our part and stand for cooperative collaboration - right from the start." And District Administrator Bernd Woide adds: "After all, it is a great benefit for the city and the entire region that tegut... is investing here with a lot of trust in the location and jobs in the long term."

Michael Egerer, tegut... Business Manager Logistics/SCM, together with the project managers Kathrin Wendt and Michael Möller, as well as Alexander Wilhelm (tegut... Business Manager Expansion, Construction and Real Estate), performed the symbolic laying of the foundation stone on the construction site. For this purpose, the stone was ceremoniously unveiled and a time capsule was filled with the Hünfelder daily newspaper, the current issue of the tegut... customer magazine "Marktplatz" as well as pictures of the project team and the construction site.

"In the coming months, the retaining walls and the base of the 37-meter-high high-bay warehouse will be erected so that the steel structure of the high-bay warehouse can be built at the beginning of next year," Johann Braun, Chief Building Officer of the Max Bögl Group, outlines the tasks and work now ahead. And he continues: "Step by step, the precast concrete columns and girders of the logistics halls will also be assembled, so that by mid-2022, the future cubature of the logistics center can be seen from the highway."

The new logistics center will be inaugurated in 2023.