“The crop looks very good. We see an increase of maybe 20 percent over last year. Last year there were some hurricanes and more. But this year we think it’s up quite a bit,” says Michael Van Meekeren of Van Meekeren Farms in Kentville, N.S.

The season is also a few days earlier this year. “We haven’t had a sweltering hot summer like some regions have. There’s been steady, frequent rainfall and good heat but not super hot,” says Van Meekeren. The region harvests one to two weeks after other apple growing regions such as Ontario or Washington and wraps up harvest mid to late October.

Bigger sizes and good volumes
Right now, Van Meekeren Farms is harvesting some early varieties such as Paula Reds and McIntosh are up next in 10-15 days, followed by Honeycrisp. “The big variety for us is Pazazz which is having an exceptional year. Very strong size and good volume on the tree which is ideal,” says Van Meekeren. “Honeycrisp looks to have increased probably a few sizes over last year.” 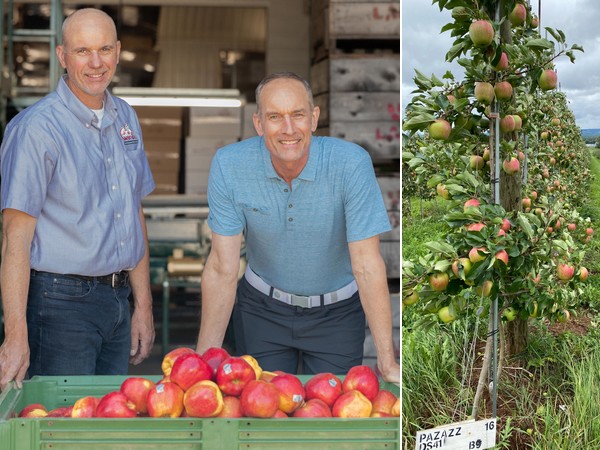 Left: Stephen Van Meekeren and Michael Van Meekeren with a bin of fruit; right: Lush green orchard due to lots of rain in 2021.

Club apples are increasingly becoming of interest to Nova Scotia growers, who already grow varieties such as Pazazz, Red Prince and SweeTango. And the issues that the region has had with hurricanes recently factor into that interest.

“Hurricanes can hit in the next six weeks. The other day there was 4-8 cm. of predicted rain,” says Van Meekeren. “Growers are reconsidering varieties because of weather now. Some varieties, like Pazazz, seem to weather storms well unlike, say, the Ambrosia. It’s the way the tree grows--the stiff tree with the apples on a long stem, they’re really affected by wind and the apples are blown off. Growers are not just deciding because of the dollars. They’re taking into account these other conditions.”

Continuing labor concerns
Along with remaining on watch for significant weather events, growers in Eastern Canada aren’t immune to the issues that growers of many commodities have seen across the country, including labor. “The labor issues continue around having enough labor and the simple transportation of labor to and from country to country and province and province. It’s unreliable and high risk. You don’t know if it’s going to work out until the day comes,” Van Meekeren says.

Good movement of the crop will be key for Van Meekeren Farms since good demand is anticipated, particularly at retail. While Van Meekeren doesn’t anticipate increased foodservice demand locally given the fact the East Coast schools and restaurants pulled product steadily throughout the pandemic, increased foodservice demand may come from the regions it sends product to such as Central and Western Canada as well as the U.S. “We see there’s a slow recovery, even though it’s two steps forward, one step back,” he says.

As for pricing, Van Meekeren anticipates a strong market similar to last year. “This takes into account some costs that have inflated, such as cardboard, labor, etc. There are increases which may translate to increases at retail. They’re just covering higher costs,” he adds.