The apricot season ended unspectacularly. In the course of the week, the once dominant Spanish batches disappeared from the market. Customers then only had access to French offers. Supplementary deliveries from Turkey and Italy played at most a minor role. Eastern European imports completed events. Local fruit generated another €5.- to €5.50 per kg in Frankfurt and was of particular interest to specialist retailers. In general, availability was noticeably limited. Demand was also down significantly. Prices often remained at their previous levels. In some cases, they increased slightly due to higher volumes. 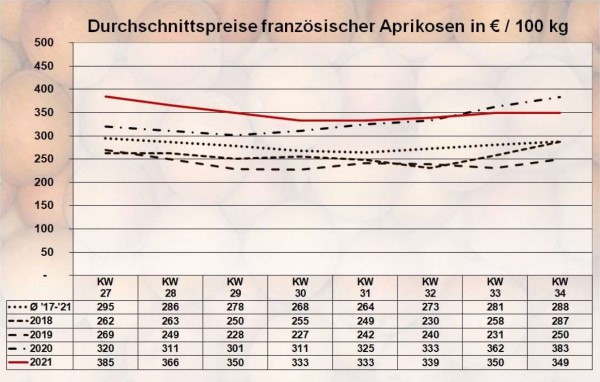 Apples
Newly harvested native lots predominated. The presence of Gravensteiner and Boskoop expanded. The supply expanded. Demand could not always keep up.

Pears
Turkish and Italian Santa Maria dominated the stores in terms of quantity. Customers were rather reluctant to buy them, although their organoleptic qualities usually left nothing to be desired.

Table grapes
Availability had expanded. Demand was easily met. Prices often remained at their previous levels. In some cases, they also showed a slight upward trend.

Strawberries
Domestic lots dominated the scene. Although supplies had tightened, clearing was not always successful. Interest was simply too weak, as a certain customer saturation could not be denied.

Peaches and nectarines
The assortment was primarily composed of Spanish, French and Italian batches. Deliveries from Turkey, Serbia and Greece supplemented the market.

Lemons
South African and Spanish products predominated, Argentinean goods complemented them. The total availability decreased, but was sufficient to cover the demand.

Bananas
Demand was not particularly strong. However, the supply of the ripening plants usually harmonized with the accommodations.

Cauliflower
Domestic batches dominated. Interest was satisfied without difficulty. No significant movements were discernible in terms of prices.

Lettuce
Domestic supplies of lettuce had slightly increased, while Belgian supplies were limited. Demand was met without difficulty.

Cucumbers
As before, the range of snake cucumbers was made up of domestic, Dutch and Belgian supplies. In Berlin, the first Spanish goods appeared during the week.

Sweet peppers
Traders had to lower their prices for previously high-priced Dutch and Belgian offers, as Polish articles were increasingly available as a cheaper alternative.