June and July have resulted in high tomato prices in Europe. Remarkably high prices for summer even, because in the past five years an average of 1.32 euro’s per kilo in July was hardly ever reached. This can be seen in the data collected by the European Commission’s tomato dashboard and is confirmed by specialists in the field.

However, it’s is not the case that all countries reach such high prices. Traditionally, the prices in the Netherlands, the country with more competition and smaller margins, are lower. Because of this, there are no record prices seen in the Netherlands, at least not according to the tomato dashboard.

Incomparable
Regardless, the mood on the market in the Netherlands and Belgium, despite the trouble growers are facing in dealing with the Tomato brown rugose fruit virus (ToBRFV), cannot be called negative. Rather, the market situation is ‘incomparable to previous years’, Arie Middelburg of Greenmatch, who concern themselves with the development of sales and prices, recently concluded.

Which is a positive thing, especially because of the good sales figures due to ‘the great rise of middle- and large vine tomatoes’, in this period. Meanwhile, loose tomatoes are also selling well due to the rising demand from restaurants and reduced land for cultivating after corona troubles. The specialists are also not falling behind. The less-than-stellar summer weather is a good thing for the market since production is lower. Philippe Degré of Rotom Tomatoes summarized the market situation at the end of last month like this: winter prices during summer times.

Above average
This is not directly noticeable for the Netherlands when looking at the European tomato dashboard. On there, the Netherlands had an average of 64 euro cents per kilo in July. This is higher than it was back in June and higher than the average over the last five years, 58 euro cents. However, unlike Italy and France, this is not a record price, and even in Spain, the average price in July rises more than it does in the Netherlands. It is a story of averages and from smaller margins overall, which might cause a slightly distorted image.

The most notable outlier on the dashboard is France, where the prices from May onward rose a lot more than normal, and the average price for 2021 came to 2.32 euro per kilo in June and 3.04 in July, which is higher than the maximum of the past five years. Currently, the production in France is picking up again, and prices seem to become normal again.

In Spain, the maximum price has not been reached. This only happened in March, a month that featured heavy weather conditions on top of that year's decline in the land to cultivate tomatoes. The price in June and July has been a lot higher than the maximum of the past five years. 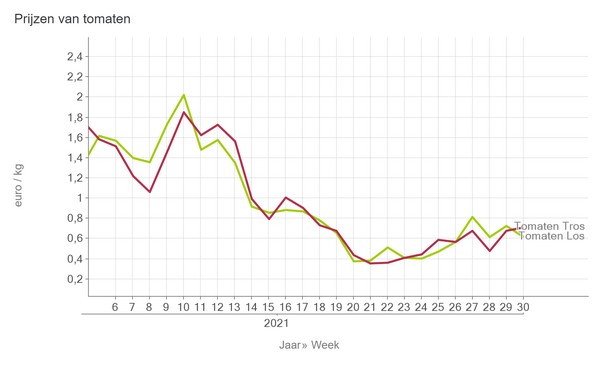 In Belgium, tomato prices are kept track of by the ministry using VBT-figures. Up until week 30, there are no winter prices to speak of, but after week 31, a rising line can be noted in the weekly figures. In weeks 32 and 33, the average price was over one euro. The prices have lowered again, but they are still good for this time of year.

Different
It is expected that the rest of the tomato year will differ from previous years. This doesn’t seem to be due to the coronavirus anymore, but rather the ToBRF-virus.

Growers in the Netherlands and Belgium have moved up their crop rotations due to viruses or disrupted biology for the cultivations under light. This can lead to peaks in production starting the end of October- beginning of November in weeks 43 to 45, Maarten Verhagen of cooperation BelOrta predicted at the end of July.

At the end of the meteorological summer, which was disappointing and led to a lower production rate, he also spoke of a remarkable season. He expected it to round up nicely before the import season starts again, which could pressure pricing.

However, the weather or ToBRFV could always cause surprises. By now, all countries have to deal with ToBRFV contaminations and, because of this, had to get rid of some of their crops, and though it might sound cruel, in these cases, one man's loss is another man's gain.