With the Chinese Golden Week holiday four weeks away, normally carriers would have by now announced the full extent of their blank sailings program in anticipation of the slowdown in demand. Given the current market situation, it seems as if carriers will not follow historical patterns of Golden Week capacity deployment. In issue 529 of the Sunday Spotlight we therefore looked at how much capacity the carriers have so far planned to deploy/withdraw in the four-week Golden week period (weeks 40-43) on Transpacific and Asia-Europe. 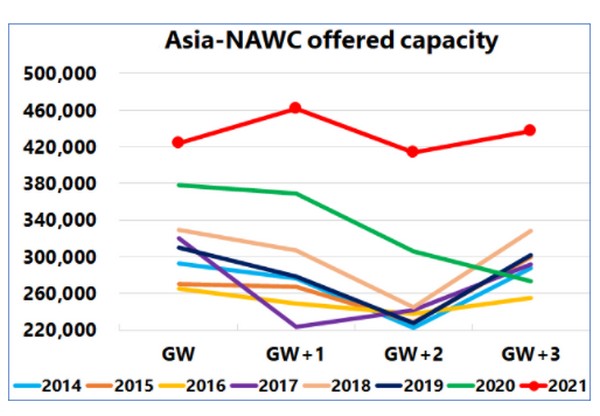 It seems that carriers are either anticipating no Golden Week slowdown in demand, or that they are prepared to keep the increased levels of deployed capacity, in the hopes of clearing backlog from congested ports. It is most likely a combination of the two, as this pattern was also seen during Chinese New Year 2021. Furthermore carriers will only withdraw 3.4% of the deployed capacity across these four weeks in 2021, against an average reduction of 8.5% in 2014-2020.

On Asia-North America East Coast, deployed capacity will be up by 29.8% Y/Y against an average of 8.7%. In terms of capacity reduction, only 2.3% of the total four-week Golden Week capacity is slated to be blanked in 2021, against a 2014-2020 average of 9.8%. Demand growth on Asia-North Europe is not as extreme as on the Transpacific, and this is reflected to a certain extent in the carriers’ scheduled deployment, as 12.0% of the total capacity across the four weeks is slated to be withdrawn, which is not too far off the 15.0% average. That said, Y/Y capacity growth is still a very high 23.8%. Asia-Mediterranean was the most in-line with historical trends, with a capacity reduction of 15.1% against an average of 17.2%.