In the 2020/21 season, Ukraine has significantly increased volumes and expanded the geography of onion exports. In total, more than 34.100 tons of onions were supplied to foreign markets, worth $6.5 million.

This was the largest export volume over the past eight seasons, but far from a record one, because in the 2012/13 season, Ukraine exported 54.300 tons of onions. 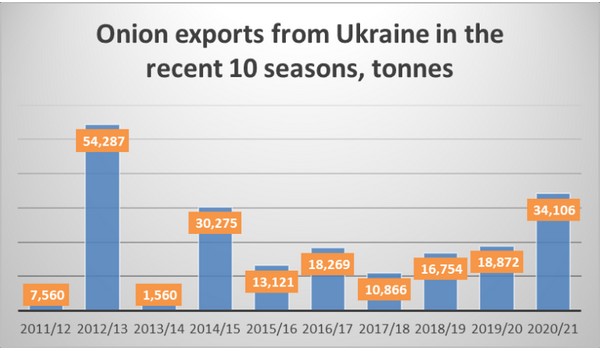 Andriy Yarmak, an economist at the investment department of the United Nations Food and Agriculture Organization: “It is probably not worth considering such an export result as a great success. The fact is that throughout the previous season the price of onion in Ukraine remained at a record low level – about 9 US cents per kg, while prices in the EU were much higher.”

“Ukraine remained the country with the lowest onion price in the world all season, and the average export price last year was the lowest in four years. This indicates the ineffectiveness of export efforts and low quality parameters, because Ukrainian vegetable growers are still focused on growing raw materials, not finished products. If onion production in Ukraine was initially guided by EU quality standards, and traders and / or growers were systematically engaged in export promotion, then exports could well be a record, and the average price for products would be much higher. According to my estimates, Ukraine was quite capable of exporting more than 100,000.”