'The cherry season is on its home stretch'

The cherry season is on its home stretch. Next to the dominant domestic offerings, European imports were only to be found in isolated cases. Only larger fruits were available, the quality of which was generally still convincing. Kordia and Regina from the domestic market often generated a nice demand at the end of the campaign. Retailers rarely had cause to change their prices. Even in Munich, where demand decreased as a result of a quality drop, prices remained constant in most cases. 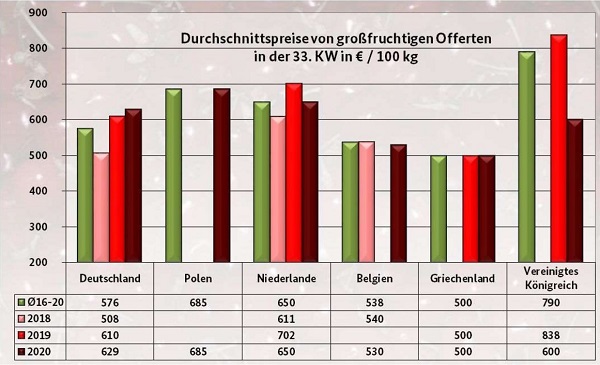 Apples
Shipments from overseas were obviously limited. Organoleptic characteristics rarely left much to be desired. German deliveries predominated in this area: Delbarestivale and Elstar in particular massively gained in importance. Marketing was generally quiet.

Pears
Turkish and Italian Santa Maria dominated events. The first Spanish Santa Maria and French Williams Christ arrived. Demand was quite friendly, but could not keep up with an increased supply. Accordingly, prices dropped frequently.

Strawberries
Domestic products dominated the assortment; Polish, Belgian and Dutch goods arrived sporadically. Sufficient quantities were available to satisfy a nice demand. This was particularly strong on the first days of the week. Then, towards the weekend, as a result of the bad weather, accommodations faltered. Only exclusive qualities were able to keep their previous prices.

Apricots
The season is about to end: supply and demand narrowed. French offerings formed the basis of the range of goods, followed in terms of importance by Turkish, Italian and, mostly, Spanish goods. Tasty domestic products cost €5.50 per kg in Frankfurt and quickly found buyers. Although availability was limited, it was still in line with demand. As a result, prices often remained at their previous levels.

Peaches and nectarines
Spanish and Italian shipments were the basis of the assortment. Turkish and French goods had a rather complementary character. In particular, goods from France were always of good quality; they were somewhat expensive correspondingly. Marketers rarely came under pressure, so that they were quite able to confirm their previous prices. Even price increases were sometimes possible.

Plums
A wide range of supply was available, with domestic and Moldovan Cacak's Schöne predominating. Overall, the availability was sufficient to meet the demand. As a result of the extended deliveries, now and then traders forced to adjust their prices downwards.

Bananas
Supply did not always harmonize perfectly with sales. Demand dropped in some places; on the one hand, there were still people on holiday in some places, and on the other hand, summer fruit was still more in the customers' focus. There were discounts here and there, affecting all brands.

Cauliflower
Domestic batches dominated, Belgian, Dutch and Spanish rounded off the market. As a rule, the quality was convincing. Demand could be described as quite friendly; larger calibers were the focus. Prices did not change significantly. In Frankfurt, Spanish offerings showed problems with coloration. The domestic products there were somewhat more unevenly graded than Belgian and Dutch goods.

Lettuce
In the case of iceberg lettuce, domestic lots predominated and Dutch goods complemented the scene. In Berlin, Spanish products were available as well. Scarce availability led to rising prices in many places. The price increases occurred in some places at the beginning of the week, but in some cases prices also rose gradually. The presence of domestic batches decreased, while Belgian batches gained in importance. The Belgian articles left nothing to be desired in terms of quality, and were expected to cost up to €17 per 12-unit lot. Domestic products were cheaper, but their quality was not consistent.

Cucumbers
Local, Belgian and Dutch cucumbers formed the basis of the assortment. Demand was met without difficulty. Traders rarely had cause to modify their previous prices. If there was any movement in this regard, it was minimal. Mini cucumbers came from the domestic market, the Netherlands and Turkey. As business was steady, prices did not change significantly.

Tomatoes
Supplies were primarily composed of Dutch and Belgian deliveries. Overall, most prices went up, in some cases quite sharply. The price of beef tomatoes was around €19 in Frankfurt and €20 per 7 kg collo in Hamburg. TOV offers cost up to €14 per 5 kg crate in Cologne.

Sweet peppers
The same was true for all markets: Dutch and Belgian shipments dropped and demand could not be met consistently. Prices therefore rose, with €20 per 5 kg carton not being uncommon for yellow and red goods. Customers then turned to the much cheaper Polish batches, which then saw quick turnovers.