The monthly imports in 2021 were lower than the averages for 2014-2020, until July when Georgia imported 20% of total yearly potato imports in one month. Low imports in previous months were caused by good local supply and lower demand due to pandemics. 94% of potato imports came from Turkey. The average price was 230 USD/ton (CIF).

Local growers find it difficult to compete with imported potatoes in terms of quality. A potato grower from the Samtskhe-Javakheti, who just started selling early potatoes explained that there is at least 0.2 GEL ($0.06) price gap between prices of local and imported potatoes now. 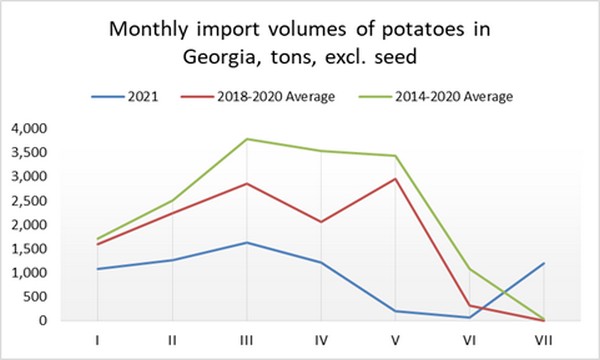 “A few days ago I brought potatoes to the market in Batumi to sell in bulk. Along with Georgian, Turkish potatoes were also sold there. I sold mine for 1 GEL/kg ($0.32) and the Turkish ones were sold for 1.2 GEL/kg ($0.38 per kg), because they looked better in terms of size and shape,” he told east-fruit.com.

According to EastFruit price monitoring results, despite active imports, wholesale prices for potatoes have increased in August. At the beginning of July the average wholesale price was 0.8 GEL/kg ($0.26 per kg), compared to 1.4 GEL/kg ($0.45 per kg) last week.