Bananas from the Philippines expand their share of the Chinese market

Chinese banana imports in July declined by 4.08% in comparison with June, and decreased by 4.71% in comparison with July last year. The Philippines is still the largest supplier of bananas to the Chinese market. The temperatures are high and so the banana trade is slow. In addition, the market conditions of domestic bananas affect the market conditions for import bananas.

Data from the General Administration Customs China (GACC) shows that 55% of the banana import volume came from the Philippines, but the strong position of the Philippines in the Chinese banana market is challenged by Cambodia and Vietnam. Banana export in the Philippines has been depressed due to the impact of Panama disease on the production volume, rising shipping costs, and Covid-19 prevention measures. However, the product quality and flavor of bananas from the Philippines remains unchallenged. Cambodia was the second-largest supplier of bananas to the Chinese market in July, with roughly 20% of the Chinese banana import volume, while Vietnam accounted for 11%. Cambodia and Vietnam continuously expand their banana export to China. Their prices are lower than the Philippines, and they are much closer to China, which keeps the transport cost low. The supply volume of bananas is larger than the Chinese market demand, but top-quality bananas are always popular. 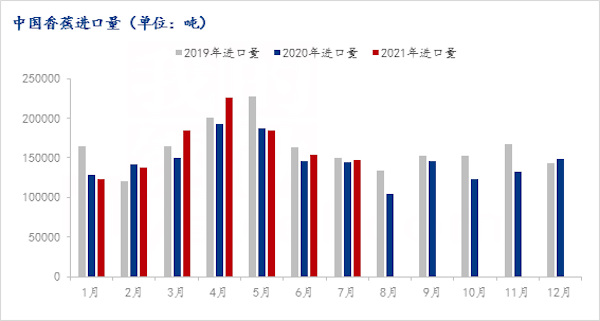 Comparison of Chinese banana import volumes in the period 2019-2021 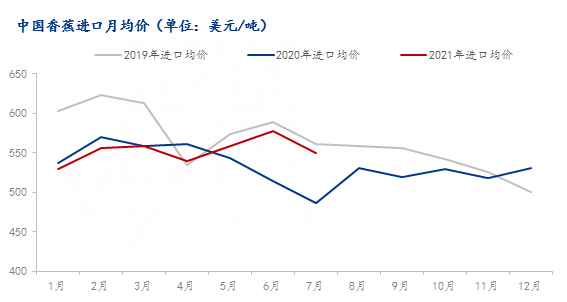 The graph shows that the average price of import bananas was around 549.99 in July. That is much higher than in 2020, but slightly lower than in 2019. The price increased by 13.25% compared to last year, but declined by 4.71% compared to the year before. The price of domestic bananas dropped because the supply volume expanded. As a result, the price of import bananas also significantly declined.

The supply from domestic production areas is currently unstable. Sometimes deliveries slow down. But the price remains within regular margins. This is currently the slow season for banana consumption, and the measure taken to prevent the spread of Covid-19 are not helping either. There are few opportunities for profit in the short term. The supply volume from production areas in Guangxi is growing and their product quality is quite stable. That is why the banana price in Guangxi is higher than in other production areas. Some of the visiting merchants shift their attention to Guangxi, and so the order volume in Guangdong declines. In Guangdong the conditions are not as good as before. The price is significantly weaker than before. Yunnan and Hainan enter the final phase of their production seasons. The product quality of their bananas is uneven, and visiting traders are not that eager to buy. The position of bananas in the Chinese fruit market as a whole is not strong at the moment, so the price is likely to remain weak for a while.