The HGV driver shortage in the UK has reached a critical point. There are many reasons behind the shortage including: less driver availability due to both post-Brexit immigration regulations and a huge upsurge in demand for haulage and longer waiting times at border points.

According to new report published by Haulage Exchange in the three months from March to May 2021, the uplift in demand for haulage was more than twice what it was for the same period in 2019.

Key findings of the report:

"Some 56% of hauliers say business has been affected by fewer exports going to the EU, while half say their operations have been impacted by fewer imports coming in. Despite this, demand has not only proved robust, but has increased dramatically."

In the survey 69% of hauliers said Brexit has caused them losses, while 19% are no longer working with EU companies. and 25% feel unable to plan properly due to ongoing uncertainty. 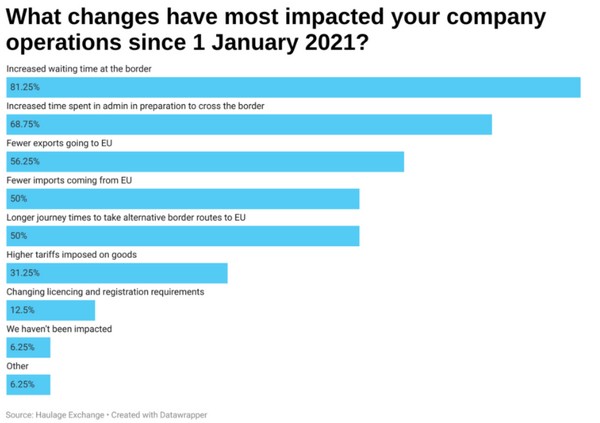 Increased waiting time at the border has had the biggest impact on haulage companies since 1st January 2021, while increased time spent on admin was close behind. Many companies have also seen fewer imports and exports from the EU, longer journey time was also a factor.

An increase in stress, anxiety and other mental health issues were highlighted by 50% of respondents to the survey. Related to this, 13% say staff are working longer hours, while 6% say employees aren’t taking their full annual leave allowance.

The study found that 56% of haulage companies have moved some operations to the EU, or would consider it in the future.

One in every 8 haulage companies identify skilled driver shortage as a significant risk to the industry in 2021. Research has suggested that as many as 12,000-15,000 have left to find work elsewhere.

The knock-on effect of this driver shortage is that some industries have been unable to find enough hauliers to transport their products. Certain products are also subject to increased checks and admin, creating additional barriers for haulage companies’ transporting such goods. 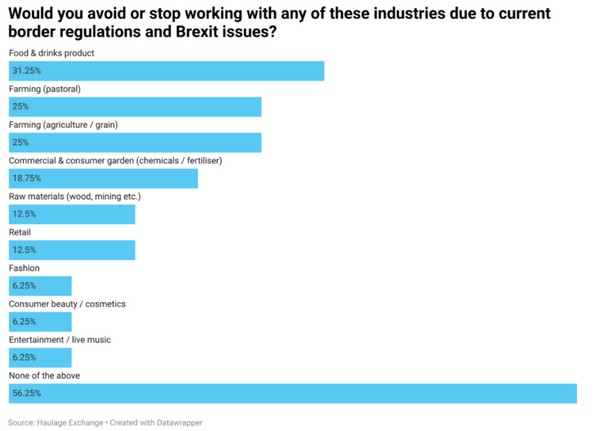 Almost a third (31%) of respondents to our survey say they would avoid working with food & drinks industry clients due to border and Brexit issues. Other sectors they are reluctant to work with include livestock farming (25%), agricultural farming (25%), gardening supplies (19%) and retail (13%).