Doubling the Boem Berry Farms acreage by adding another 15 hectares

On a random road near Kingsville, in Ontario, Canada, Chris Bastiaansen of Meteor Systems is driving. The Boem Berry Farms sign along the road, with the remarkable red-colored strawberries, reveals where he’s going. He’s passing a friendly guard that is guiding him to the entrance of the company.

Once inside, the packing hall he enters smells like strawberries. A relatively small office with only a few people indicates the Dutch way of working. He meets up with Ton Bastiaansen and together, they walk through an 8-meter-wide and very lengthy corridor that connects two greenhouses. To the left of the corridor, they pass two similar compound irrigation rooms, boiler rooms, and storage rooms with empty barrels. Both irrigation rooms contain eight giant water storage silos, for rainwater, tap water, disinfected and non-disinfected drain water, and daily stock. On the right side, through the glass façade, we can see the strawberries hanging. It is almost the end of the crop. 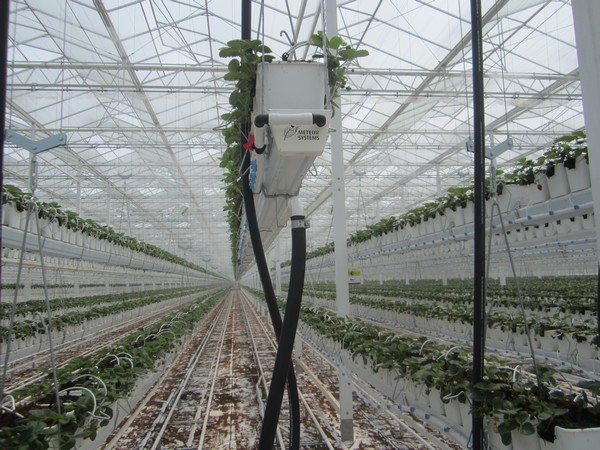 Boem Berry Farms
Boem Berry Farms was started by two Dutch strawberry growers Joost Van Oers and Ton Bastiaansen. This happened in close cooperation with the Canadian marketing company Mucci international. In 2016, the construction of 5 ha was started as the first phase. In 2019, phase 3 was commissioned, resulting in the completion of the total 15 ha project in 2019.

Immediately, there was talk of the next expansion of 15 ha and the owners decided to build this in one go. The permits were received on time and they could get started. The first pile was driven into the ground in September 2020 with the announcement to the greenhouse builder that the greenhouse must be glass-proof before winter. The greenhouse builder was able to make this happen, says Bert Mucci happily. The first 7.5 ha of the new building has been planted earlier this month, the final 7.5 ha will be planted this week. After that, they will switch crops in phases 1, 2, and 3.

Water
"In Canada, it’s not common to collect rainwater for personal use. Every grower uses tap water, as it is relatively cheap and constant in quality,” Chris Bastiaansen shares. “However, it is mandatory to provide water storage with an open water basin. This allows rainwater to be collected during heavy rainfall and then returned to nature.” That’s why the Boem Berry Farms team has started digging a rainwater basin.

Boem Berry Farms has two basins, an open basin of 20,000 m2 and a closed basin of 20,000 m2. The latter is completely sealed with basin cloth and floats. The pool is 7 meters deep and has a safety wall of 1 meter high. When the basin is full, it overflows into the open basin. The large amount of soil that was excavated was needed to solve the height differences on the new building site. As a result, the new 15 ha is at the same height as the existing 15 ha. Both blocks are now 528 x 285 meters. 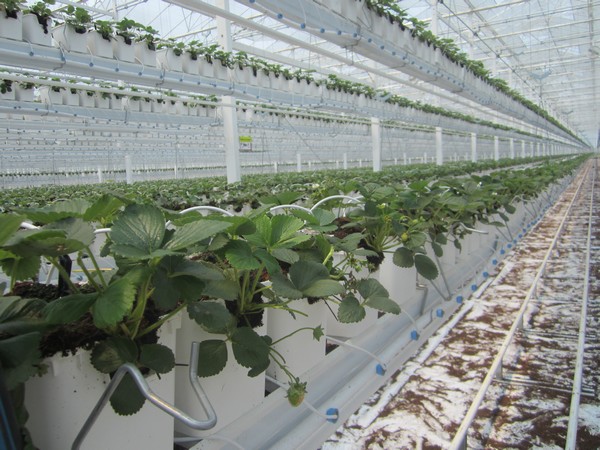 Cultivating and propagating
In phase 3 of the first project (5 ha) strawberries are cultivated and strawberry plants are propagated, Chris shows. “The lifting system for the cultivation gutters makes it a unique project. While the mother plants are being set up and the young plants are being cultivated, the growing gutters are suspended at maximum height.”

The propagation takes place in May and June. Planting takes place in July and August. The choice was made to use an everbearer, so that Boem Berry Farms can supply the market with strawberries year-round from just one crop.

Because the elevating system offers several advantages, also during production, the Boem Berry Farms team has chosen to provide the new 15 ha with an elevating system as well. With 10 gutters per 8 meters, there’s still spacious paths for crop work and harvesting. "We had already set up a trial with 10 gutters in 1 hood in phase 3 in 2018," says Ton Bastiaansen. “We want our workers to work comfortably while producing in the most efficient way possible.”

Labor
The Boem Berry Farms team consists of people from Mexico, Guatemala, and Jamaica. “The problems with Covid, of course, caused a lot of concern,” Ton adds. People could not return to their home countries at the usual times from vacations.”

Housing facilities for 120 employees had already been built in 2016. “Naturally, this had to be expanded. During the construction of the new housing, changes were made so that the whole thing was adapted to the new requirements set by the municipality because of the modified Covid rules,” he shows. Meanwhile, all 192 new employees are housed in the new facilities. All employees are housed on the premises and have all the necessities at their disposal. The long rows of trees along the housing units are a pleasure to behold.

"Is it difficult to recruit suitable people?" we asked Ton. "Canada has a good working program with said countries. This is much better regulated than in the USA. Putting people to work illegally is out of the question in Canada and heavily punishable. People holding positions of responsibility is a challenge. It is difficult to get positions filled by, for example, a suitable General Manager or Operations Manager or simply a grower who is concerned with the crop and climate. Such positions are vacant. That's why I'll leave my phone number here, it's +31 (0)6 5356 9044," Ton smiles.