The electric three-wheelers in use on a farm near Lydenburg, Limpopo (photos supplied by Berda Agricultural Consultants)

He decided that the three-wheelers, which are charged at normal electrical outlets, could have potential on South Africa’s large farms where staff, particularly scouts and irrigation personnel checking on irrigation equipment, have to travel long distances.

Currently many farms employ petrol- or diesel-powered quad bikes and motorbikes, but the continuous need to top up fuel (plus concomitant risk of fuel being siphoned off) make it an onerous and carbon-intensive choice.

The three-wheelers have another benefit: they are soundless, which is greatly to the advantage of night guards patrolling farms to prevent theft of pivot control cables and motors or of the crop itself. 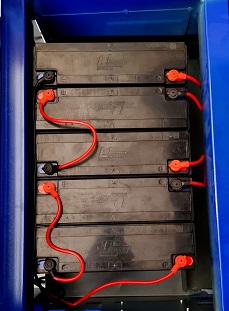 Two years after the initial introduction, 270 of these electric three-wheelers that run on five 12 Volt lead-acid batteries (pictured right) are in use on fruit farms in the Western, Northern and Eastern Cape, Mpumalanga, as well as in Limpopo.

“The big advantage for farmers is the input costs. The capital investment on a three-wheeler is less than on a quad bike which uses approximately R25,000 for fuel over two years,” Pierneef says. The three-wheelers can run 30 to 40km on a fully-charged battery.

Moreover, the electric vehicle helps farms in reducing their fossil fuel use and their carbon footprint which in turn has reflected favourably in farm audits.

“We have replaced all of our motorbikes with the three-wheelers. I just got tired of the never-ending petrol purchases and the frequent repairs needed on motorcycles,” explains Hennie de Beer of Vaalbos Trust outside Marble Hall, Limpopo. “I was initially very sceptical, I didn’t think they would last, later I bought another one and now we’re standing at nine.”

He remarks that there’s a lot of interest from other farmers in moving away from petrol-driven farm vehicles.

Lower repair pressure and plentiful spares available
Hennie maintains that in his experience over the past two years, the three-wheelers require much less in the way of repairs than motorbikes and quadbikes. The three-wheelers are charged overnight, it’s never happened that a battery didn’t last through the day.

Only one model is imported and a sufficient number of spare parts are in stock in South Africa at the moment to service all of the units currently running in the country.

Spare parts are available from three agents in the Western Cape, one in the Northern Cape and two in Limpopo.