Without access to quick and detailed data, exporters have a poor understanding of the conditions that their fruit and vegetables are being exposed to, and the resulting impacts on quality and profits, according to an Australian researcher who is using AgTech to monitor fresh produce consignments.

Senior horticulturist Andrew Macnish from Queensland's Department of Agriculture and Fisheries (QDAF) is leading the Serviced Supply Chains project that is aimed at ultimately increasing the profitability and reputation of Australia's horticulture exports.

He says the nation has a reputation for high-quality fresh produce and has many competitive advantages through its close proximity to Asia but it is often hard for exporters to know if they are meeting market standards, compared to their competition. He hopes this project will help improve the knowledge and skills for better supply chain performance, which will increase the consistency of the product quality on arrival into the market destinations.

"It might surprise you to know that few export shipments are truly monitored for handling conditions, and for quality as it moves through the supply chain," he said. "Our team did a survey recently of mango exporters and we found that 80 per cent of them were doing some form of monitoring; they were including temperature data loggers in some shipments, but they were only getting data back for about a quarter of those. That is because they were using relatively low-cost manual download loggers to measure temperature, so they are efficient and effective devices, but it relies on someone at the other end of the chain to retrieve the devices and do that manual downloading for you."

The project is a joint effort from QDAF, Hort Innovation, the Victorian Government, along with investment from major fresh produce producers, Manbulloo, Montague and Glen Grove Orchard - and focuses mainly on mangoes, stone fruit, table grapes and citrus. Mr Macnish says the research involves regular monitoring through cutting edge devices, which then develop decision aid tools and shelf-life prediction models, which support exporters and supply chain partners to adopt best practices. Both Manbulloo and Montague have worked with QDAF and Agriculture Victoria to monitor over 100 export shipments over the past 4-5 years. 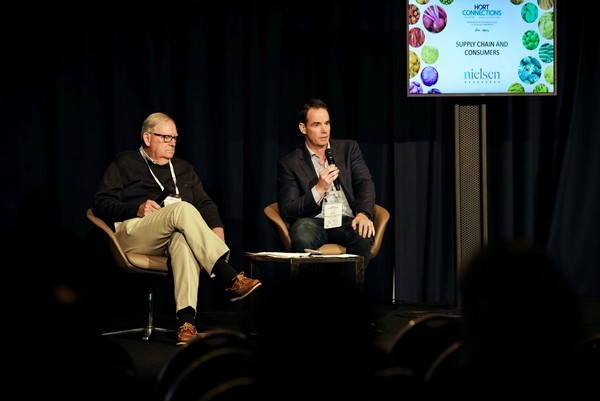 Photo: Scott Ledger from Manbulloo and Andrew Macnish from QDAF

Manbulloo says the main reason for getting involved in the project was to improve the consistency of the ripeness of the mangoes on arrival to the destination market, which is important given that the in-market partners need at least a week to distribute the product to retailers and consumers. The company's Quality and Export Market Manager Scott Ledger has had experience trying to retrieve USB loggers in previous roles, and says he has had a 25 per cent success rate in getting any data back - and then he had to manipulate the data into meaningful information. So, the potential of this project was having real-time information and being able to make quick decisions.

"The thing we learnt was that our handling in the supply chain wasn't as good as we thought," he said. "Four years ago, we were using both air and sea freight, but we discovered sea freight was too challenging; the time that the fruit spent in the containers was too long for our mangoes. That helped us decide that sea freight was not suitable, and we went completely to air for all of our shipments. But with that, we also learnt that there is incredible variability in temperature through the chain. We have monitored over 100 shipments and every shipment had a different temperature profile - that has been a huge learning. We also found variability between pallets and some variability within pallets."

He added that there were four main stages of the supply chain where the company and its partners needed to better manage; in their own vapour heat treatment facility, at the freight forwarder, arriving in the market and handling by the supply chain partner. One example that he gave is that Manbulloo supplies into Korea during subzero weather, and shipments often spend days in the freezing conditions and suffer chilling injuries. Being able to more effectively analyse what is happening to the fruit has allowed everyone in the supply chain to be aware and take preventative action to help protect the fruit.

"The two factors that affect shelf life the most are temperature and time, so (this project) has enabled us to identify where we need to improve," he said. "The biggest learning is that there is enough variability to cause differences between shipments, and within shipments. For us moving forward we don't just want to monitor what the temperature is, but also know the implication of the temperature that the mangoes experience, on how it needs to be handled further down the chain. Our partner in Korea is now more aware of the impact of ambient temperature on arrival at the airport. So, prior to when we started monitoring, the fruit could sit for four days at a warehouse at the airport, waiting for quarantine clearance. We have monitored temperatures as low as 10 degrees. Previously, they would just put them in the coolroom or ripening room, they are now using forced air or down stacking the pallets so there is more air movement around the cartons. It's a combination of a few things that have given us our improvements." 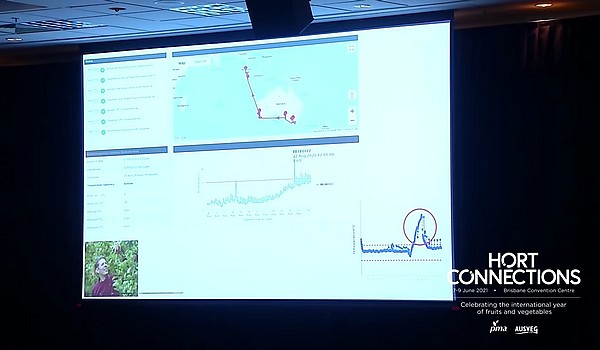 Similarly, Montague had also embarked on a large program of stone fruit to the China market, and Chief Innovation Officer Rowan Little says the motivation behind getting involved in this project was to work out which one of the many cultivars would make it through the supply chain.

"There were two things that we wanted to work out; first we wanted to do an analysis of the supply chain and once we put a container of fruit at the port, how long it would take to get to the customer, and secondly, once it was put there, was there certain cultivars that we just should not try (to send)," Mr Little said. "In stone fruit, with over 200 cultivars, we have a lot of choices. The fundamental learning that we had was that it was taking much longer than we ever imagined for a container of sea freight, whether it is peaches, nectarines or plums, to get to the destination. The protocol allows for a voyage of around 20 days, but when we looked at how long it was taking, it was taking in excess of 30 days from when we loaded the fruit to when the customer got the fruit. However, we had feared that there might be big temperature spikes. But generally, the temperatures at which the fruit travelled was good - it was just the time it took to get there."

Mr Little hopes that in the future exporters will be able to monitor the fruit through the whole voyage and work with the supply to identify and correct issues as they arise.

"We can work with the supply chain to when you see a problem and potentially offload fruit to a port if there's something that you've seen before it got to the destination," he said. "That would save having to dump the fruit when it arrived because it didn't meet protocol. The other thing you could do is use real-time monitoring in terms of temperature. This happened to us with a shipment of apples, where we could see a spike in a container, so we could warn the customer of the impending risk. Then when there is a poor out turning at the other end, they could see that it wasn't a deliberate act by us, and we weren't trying to get away with anything, so the collaboration is a lot stronger. Another thing is that it gives us the opportunity to hold the people providing the freight to account because we can see if they are mismanaging our fruit - that ultimately helps us to get better value for money."