The 2021/22 Italian citrus season will be characterized by low production, unlike the previous season when yields were instead abundant. In order to get a more up-to-date picture and to understand the reasons for the expected production shortage, we asked agronomist Francesco Perri, a citrus scientist specialist, who, after personally visiting various areas and consulting with other colleagues and producers, confirmed that the citrus shortage will unfortunately affect all regions of Italy. 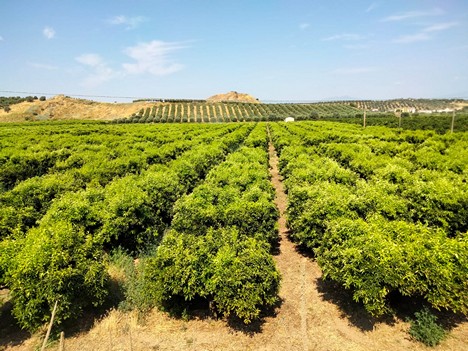 Field of Common Clementines in the Sibari Plain. In the photo, you can see the impressive vegetative growth at the end of July, typical of years of low production.

"The reduction in production affects all environments in which citrus fruits are grown and affects every species (oranges, mandarins, lemons, etc.). Therefore, not only Sicily, the Italian region with the largest number of hectares planted with citrus fruits, but also Calabria, Basilicata and Apulia, as well as Campania and Sardinia, are affected, although only minimally.

"There are areas where the yield is really low, others where the 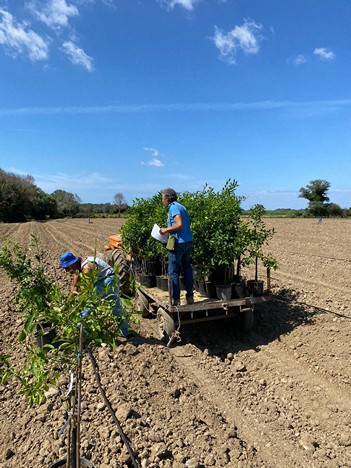 quantity is small, and farms with good yields are very rare. At the moment, however, we can't make any forecasts in terms of precise percentages of how much will be lost compared to a year of good production, because we are still in a phenological phase in which, although the fruit set has already finished, the fruit is too small to provide an estimate. We will be able to be more precise in a couple of months, when the fruit will get bigger and the quantity on the plants will be more evident".

(In the photo above, agronomist Francesco Perri during the coordination operations for the creation of an innovative citrus plantation in the Piana del Sele, Eboli - Salerno).

"There are several factors that have caused this shortage. In Italy, we had an abundant production in the last citrus season, although the size was unsatisfactory. This year, however, we had a very poor flowering, due to the particular weather pattern of the previous months. In addition, during the very delicate phenological phase of fruit drop, which usually occurs between mid-June and mid-July, we had very hot temperatures that lasted for several weeks, which led to a significant drop in the already scarce fruits. 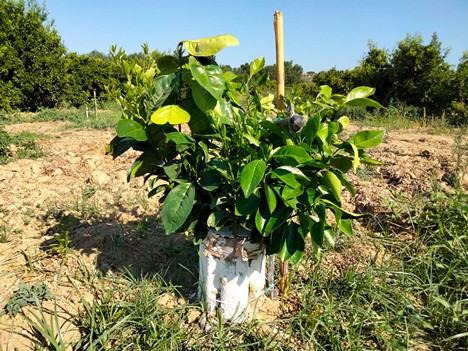 Common Clementine plant grafted with another variety of citrus fruit

"Specifically, with regard to the common clementines, this year, when production will be scarce, it will probably be possible to harvest all fruits, unlike in seasons of high productivity, where it has become impossible to harvest and sell the totality of the produce. For this reason, in the areas specialized in clementines, and after the last catastrophic commercial campaigns, some farmers have carried out a varietal reconversion by grafting adult plants, so as to lighten the quantity of common clementines in the next years. My hope, as has long been preached, is that other producers will follow this example."