"This 2021 summer's heat wave would have led to the first picking of Canicattì's IGP-labelled Italian grapes in the first ten days of August," according to Salvatore Lodico, president of the Consorzio per la Tutela e la Promozione dell'uva da tavola di Canicattì I.G.P. (Consortium for the protection and promotion of the Canicattì Igp-labelled grape), who traced the socio-economic importance of the grape for the production area through some personal memories. 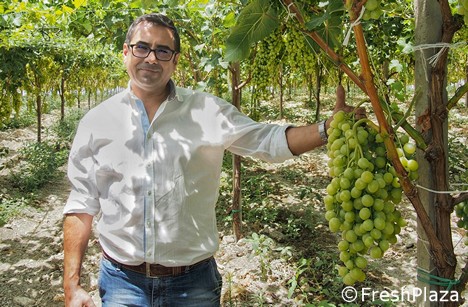 "The railway carriages were loaded with grapes from warehouses located in the city centre and the goods were covered with ice so that they would keep in good conditions on their journey to northern Italy. This was the case until the mid-1970s, at the peak of the economic boom. In those days (in '77), with the same price paid for the fruit of a vineyard of a thousand plants, it was possible to buy a flat; today, the sale of top-quality grapes in the field is worth between 18 and 25 thousand euros (gross). This proves how times have changed and how, over the years, the value and values associated with this sector have been lost. Of course, even in those days it wasn't all sunshine and roses. In the wake of some speculation, several companies had to declare bankruptcy and so did Canicattì, where there was a sort of Black Friday, with sad episodes,” said Lodico.

"The consortium today has more and more new members, including producers and packagers for a total of 90 members and many pending applications. We are a modern and vital group, which is consolidated by tradition. Unfortunately, due to the pandemic, we were not able to carry out the promotional events we had planned. In addition to this, we were unable to participate in the sector's trade fairs, such as Fruit Logistica and Fruit Attraction, which did not take place. We will see how the new circumstances evolve in order to evaluate if and how to go to Berlin and Madrid in the future," continued Lodico. 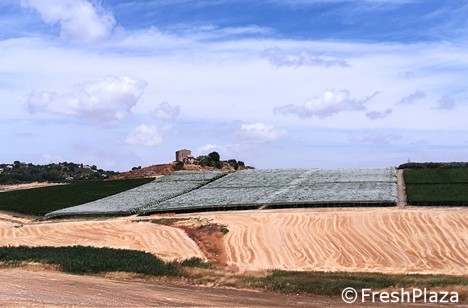 Overview of the territory. In the background, a vineyard of Canicattì Igp-labelled

"There is a great desire to start again and, above all, there is a lot of work to do. The commercial season that is about to begin, with our single variety of IGP-labeled Italian grapes, promises to be really good, even if the strong heat of recent weeks has brought forward the harvest to the first decade of August. The phenological stage is perfect, the berries are fully and uniformly formed. On the commercial front, we expect an excellent response, thanks to the recognition given by the brand to a historic and high-quality product like ours, with its unmistakable taste of Muscat. On the other hand, the production techniques, in compliance with the PGI regulations, are increasingly efficient and sustainable, thanks to the continuous reduction in the use of pesticides. Our consortium members produce with a limited number of residues. On average, the threshold is 30% below the minimum limits imposed by the strict regional regulations," added Lodico.

"This year, instead, there will be no lack of quantity and quality, but there is a lack of manpower, a problem that is affecting all sectors of agriculture. Moreover, the bureaucratic pressure that weighs on the management of the workers is indescribably and unnecessarily complicated. Young people should be incentivized with active labor policies needed in agriculture. Incentives should then be disbursed on the basis of the results achieved," remarked Lodico.

"Another huge problem is the increase in the price of materials, ranging from 30 to 50% depending on whether we are talking about packaging or plastics. Last but not least are the increases in logistics and road transport, on which we depend entirely to move our goods, due to high fuel prices. It is necessary to restore production in Italy as much as we are able to produce, leaving the non-essential quotas to imports. It is not a matter of commercial protectionism, but of survival, as Mr. Covid-19 has all too well taught us."