"We have reached our current market position, thanks to the combination of inspections and expertises"

On 1 August, HDG The Fruit consultants will celebrate its 40th anniversary. With founder and owner Otto de Groot - who handed over the daily management to Stijn Verstijnen and Rob Boogmans in 2016 - we look back on and ahead to the company that has experienced substantial growth, with the fixed constant that it has always been active from the Rotterdam Merwehaven area in the field of expertise and quality inspections of fruit and vegetables.

"At the beginning of 1981, I was approached by Fred Harmsen van der Vliet to join him in taking over the existing assessor's office of Willem van Deventer, at the time one of the few sworn assessors our country had," Otto recalls. "At the time, we started out from Europoint 1 as Expertisebureau Harmsen en de Groot, from where we moved to Galvanistraat, after which we moved into a room in the then empty citrus auction in 1998."

Electronic typewriter and a pager
When asked about the early days, Otto answers: "We started out with two telephone lines, one for incoming calls and the second to the secretary's service, who could page us when we were out. Very advanced for that time, we already had an electronic typewriter and a pager. Buying a copier was too expensive, so we copied at Van Dijk Delft. Our predecessor Willem van Deventer even made his notes on the leftover auction catalogues."

Not just the options for communication, but also the fresh produce sector has changed over the years. "Back then, we worked for about five auctioneers and a few larger importers. The amount of fruit that came in is also incomparable with now. In those days, most fruit still went into the lorry unrefrigerated. Over the years, we saw the loose crates and cartons being replaced by pallets in refrigerated ships, which have largely made way for containers again. Our position has also changed over the years. From someone who traditionally stood on the side of the importer, we increasingly became an inspector for the total spectrum of importers, exporters and insurers."

Combination of inspection and expertise
In 2003, Fred Harmsen van der Vliet left the business and soon after Rob Boogmans was appointed managing director of HDG: "From a small company of two people, we have grown to more than sixty people in the whole group. Moreover, we have grown from a company with little general knowledge to a company with highly specialised knowledge. We demonstrate this with, among other things, the Nivre Register-experts in our group, which makes us unique within the AGF sector. Also unique are our ISO certification and Global Gap membership. With these, we demonstrate that our processes and personnel meet international standards and that we make great efforts to continuously improve our services. In addition, I am convinced that it is the combination of inspections and expertise that has allowed us to reach our current market position. The competition often does one of both or serves a much broader market segment. We have always continued to specialise in the AGF." 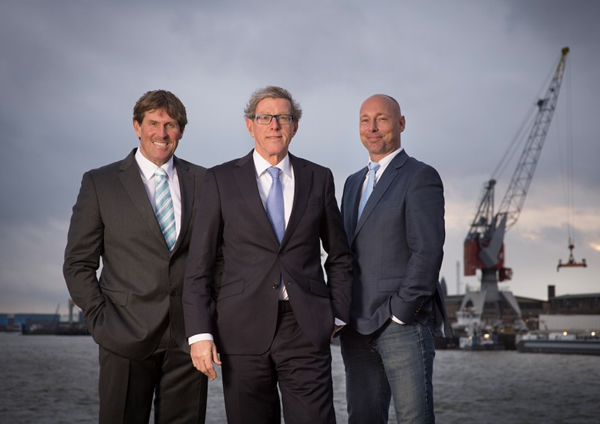 HDG also went through an international expansion. "With our head office in the port of Rotterdam we are still on top of the fruit arrivals, but we now also have subsidiary organisations in Valencia and Hamburg. Via an extensive network of correspondents, we carry out our damage assessments worldwide. If a consignment of cherries is insured via a customer in Hamburg and arrives in Japan, our man on the spot goes there and we use his information to draw up the damage report. But in the case of major damage, we go ourselves. That can also have consequences; for example, I once spent a month in China because the Chinese were playing a game with a boat of bananas," Otto recalls, laughing.

Analytical methods
Over the years, he has strongly advocated a more analytical approach to damage claims. "Especially in the period 1990-2010, when refrigerated ships had to compete with container shipping companies, the necessary cost reduction led to major cutbacks in maintenance, with all the adverse consequences this entailed. However, these - often invisible - defects, such as damage to pipelines and tanks, often had an impact on the quality of the fruit. By working with analytical methods and smartly approaching legal procedures, we were able to protect cargo owners and insurers. I devised a fool-proof system to prove fruit choking in containers. In tens of thousands of cases, we have been able to prove that the damage was caused by non-functioning refrigerated containers.

Asked what he would like to add to the potato, fruit and vegetable sector, Otto replies: "I would be very pleased if someone came up with a system that measures the respiration rate of the products that are shipped here to be ripened. Many parties nowadays present themselves as ripening specialists, but the stage at which the fruit arrives is often unknown. Nobody knows exactly where the product comes from or what physiological stage the fruit is in, so ripening is often a matter of trial and error. There is still a huge gap in terms of missing information."

Agrisoftware4U
HDG jumped on the digital boat in 2013 with the development of the QC4U application, which enables the collection of quality data from producer to end customer. What is new is that the company has now set up the software company Agrisoftware4U to further expand this inspection software and market it more widely. "We collect a huge amount of data every day. Currently that data is the property of the client for whom you do the reporting, but in general you can identify many more trends with it," says Otto.

Otto does not want to answer the question of whether HDG will still exist in 40 years' time. "That would be arrogant, but for the foreseeable future I have no reason to fear for the survival of the company. For me, there is no doubt that the specialist work of damage assessment will continue to be done worldwide. The urge to determine quality is constantly developing and although the type of damage changes, so does the damage. Therefore, in forty years, the craftsmanship has continued to exist, although today we can carry out the work using the most advanced tools."