Test set-up at Thwan van Gennip for double use of soil: sun and cultivation

In the Dutch towns of Someren and Lierop grower Thwan van Gennip, cultivation system supplier Green Meteor, the researchers of the KU Leuven and Engie, have accepted the challenge to research whether or not it is possible for them to ‘harvest the power of the sun’ twice via Agri PV.

Agri PV is a combination of cultivating crops and generating solar energy with solar panels. The participants start with a pilot this month using strawberries, raspberries, and the propagation of raspberries to measure the effects of solar panels above the crops in terms of the crop's yield. In part, the so-called bifacial solar panels are used during this pilot, which are active on the backside of the panels as well. 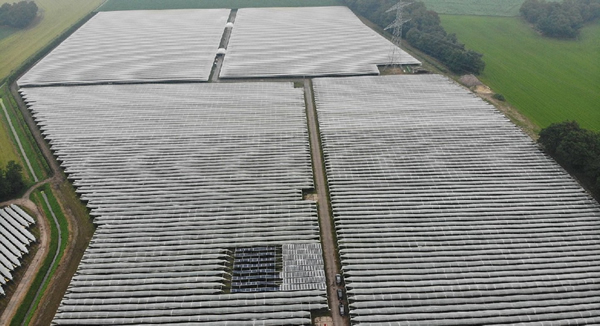 Unique test
What makes this pilot unique is that it tests the application with strawberries and the propagation of raspberry plants. Up until this point, this hasn’t been tested anywhere in the Netherlands before. The combination with raspberries has already been shown to deliver positive results in other locations. On the pilot location, we now specifically test with two different configurations: with transparent but also traditional solar panels.

Analysis KU Leuven
The different teat set-ups are monitored and analyzed by the KU Leuven to establish how the crops fare under the solar panels. To achieve this, crop development is carefully monitored and mapped. Think of bud- and fruit development, sugar levels, picking weight, and flavor. The results are then combined with precise measurements of, among other things, temperature, lighting, and humidity under the solar panels. All of this information is compared to the same crops that are in a close-by referential field and are cultivated by traditional means. Together with our lab in Brussels, we look at the electrical performance of the system through ENGIE.

Alternative to foil
By combining crops and solar panels on the same soil, that soil is used twice. The solar panels also offer protection from rain, hail, and direct sunlight and form a favorable microclimate for the crops to grow. These ‘fruit roofs’ with solar panels are an alternative to the traditionally used white foil. In the construction phase, the irrigation of the crops is fully automated.

Great potential
If the pilot turns out to be a success, there is great potential for this way of using the soil twice. In the Netherlands, 2800 hectares are used to cultivate soft fruits such as raspberries, blackberries, blueberries, and strawberries. At the moment, they are searching for potential ways to use this area twice in all Regional Energy Strategies. These ‘fruit roofs’ with solar panels are a great solution for this and fit perfectly on the first step of the solar ladder. The first results of the research conducted by the KU Leuven are expected to be announced around autumn this year.